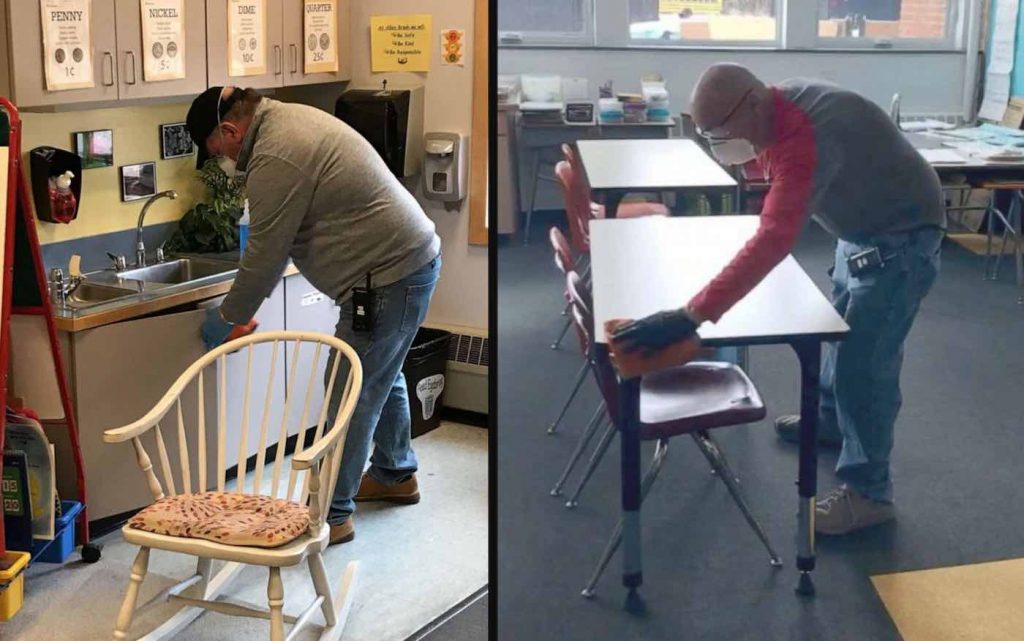 As a means of thanking school custodians for going the extra mile, making sure school facilities are kept clean and sanitary during the COVID-19 outbreaks, appreciative parents from all over the country have raised thousands of dollars for their district janitors.

Prior to state legislators closing down schools to curb the spread of the coronavirus, two public schools in Williston, Vermont were temporarily closed earlier this month after a staff member fell ill.

Since the employee had just been traveling out of state and had stayed at a hotel with confirmed cases of infection, the school was closed down for a thorough emergency deep cleaning.

Brooke Thomas, a mother of four, had been discussing the incident with a number of her fellow school parents in a Facebook group when she got the idea to raise money for the janitors conducting the deep cleaning.

“I said we need to recognize that these staff members who are going into potential contamination and a disaster zone, really, and putting themselves at risk,” Thomas told CNN. “It’s already an under-appreciated job as it is, and not one that gets a lot of respect. It was a feel-good way to get people to recognize that.”

In just one short week, Thomas’s Facebook fundraiser for the custodial staff at Allen Brook School and Williston Central School surged past its original goal of $200 and raised more than $7,400 in donations.

Similar initiatives have popped up across the United States, like Shawna Lidsky’s GoFundMe campaign for the custodial staff at her children’s school in Shelburne, Vermont, which has already raised more than $4,000.

“Inspired by our neighbors in Williston, who raised over $7000 for their custodial staff during the COVID-19 pandemic, let’s come together and pass on this act of kindness in our town!” wrote Lidsky.

According to ABC News, another crowdfunding campaign from Medfield, Massachusetts has also raised more than $9,000 for their custodial staffers.