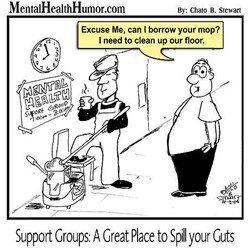 That’s the first thing we in the Black Community would say if someone suggested that we ‘see a therapist’. But, let me be the first to tell you, I’ve been to therapy. It wasn’t at all what I had expected. It was early morning in 2003, the month was March. I was the only black guy in the room. I had just turned 40 back in December. I went to therapy ‘on my own’ ( I’ll explain later why I say it this way ). There was 1 black woman, and the others were white, ranging from a couple of 18 year olds to a couple of guys who were in their 80’s. There was about 8 or 9 of us. The group therapy was basically like a classroom setting, whose hours were from 9 am until 3 pm. We would go home at the end of the session, and come back the next day, Monday thru Friday. We’d have 3 or 4 activities, or mini-sessions, that we’d attend, together, every day. I only expected to be in there for ‘maybe a week’ ( that’s what my mind told me ). I ended up being in there for a whole month! I still can’t believe that I was in there that long. But, I learned a lot, and so did the others. The main lessons that I learned from being in those sessions was that 1) life was not to be taken soooo seriously, and that 2) the problems that you think you have were miniscule compared to the ones others were going through ( some of my best poems were inspired from that period of my life, hence the name, ‘Inspiredbyu’ ), but 3) stress can, and will, take you out if you don’t do something about it. The reason that I even went to therapy was stress related. I had it, and really didn’t know it. I just knew that I wasn’t acting normally. So, I sucked it up and said, ‘what the heck’, and I signed myself up ( I still don’t care for the words ‘commit myself’, which you were actually doing, and are the very words that I truly believe scares the Black Community, especially black men ). I guess in a nutshell, the moral of this story is basically the little speech that I gave all of my ‘classmates’ in the waning days of my stay there. I told them all that I was walking history. I said to them that they will NEVER see a young black man ‘commit’ himself, again, but that if they did see it, he would probably be there because the judge or some other authority sent them. I also said that most of them wondered why I was even there. I heard it basically every day that I didn’t look as if I was having any issues, and I wasn’t taking any medications, which quite a few of them were, even the young ones. I told them that that was the scary part. I looked normal. Most people do. So, if I look normal, that means I don’t have any problems, right? Wrong! I’d just spent a whole month in there with all of them. But, I felt as if the 800 lb gorilla had been lifted off of my shoulders after all of the sessions were completed! I told them not to fret that a couple of them had been in the proverbial revolving door because they kept coming back periodically. They just needed a tuneup. They were four cylinders. I was the Northstar engine ( Cadillac engine for those who don’t know ), and therefore didn’t need a tuneup as often. But, all vehicles eventually need one. So, for all of the ‘normal-looking’ people walking around who’d never been to therapy, they’re all overdue for tuneups. The therapists were so impressed by the advice that I was giving out every day, that all of them at one time or another asked me did I have a degree of some nature in their field of expertise. I should have told them that I do, like I said in one of my poems, ‘A degree in life’s experiences we’ve all got’. So, as you can see, ‘I’m not Crazy. I Just Needed a Tuneup’.

I’m Not Crazy. I Just Needed a Tuneup.