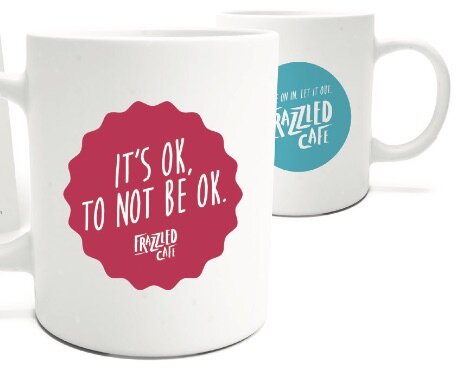 If you’re feeling a bit frazzled, you might decide to have a chat with a couple of friends over a cup of coffee, talk things over, and hopefully walk away feeling a bit more positive about life in general.

Frazzled Café Online provides the equivalent of a neighborhood coffee shop in a virtual environment, where people who are feeling overwhelmed by the stresses and strains of everyday life can get together to share their experiences.

Since completing a Master’s degree in cognitive therapy at Cambridge, British comedian Ruby Wax has written several self-help books—such as, A Mindfulness Guide for the Frazzled—with her distinctive style of observational humor. During her UK book and theatre tours, she found that when the floor was thrown open for Q and A, audience members were keen to connect and talk about their issues.

The need for a support network to cope with the demands of our fast-paced lifestyles inspired her to create a nonprofit online coffee chat room.

“Frazzled Cafe is about people coming together to share their stories, calmly sitting together, stating their case, and feeling validated as a result, says Ruby. “Feeling heard, to me, has always been half the cure.”

MORE: Americans Who Drink This Much Water a Day Were More Likely to Report Feeling ‘Very Happy’

Meetings are held regularly to allow people the opportunity to speak out in a safe, non-judgmental environment. While face-to-face meetings are currently on hold, online sessions are being held instead. These take the form of larger groups of up to 50 people led by Ruby, and smaller meetings hosted by trained facilitators.

The meetings are hosted on Zoom, and when everyone is ready to begin, Ruby launches into the main session with a short mindfulness meditation. The meeting is then thrown open to anyone wishing to share personal experiences. A few simple rules are in place, such as to steer clear of contentious topics, but the message is that: “It’s OK to not be OK”.

CHECK OUT: Next Time You’re Feeling Particularly Stressed or Anxious, This Study Says You Should Play Tetris

Participants from across the UK, and elsewhere, are among the group to speak about how they are feeling, giving an insight into a cross-section of different views. The group is mainly made up of women, though there are a fair number of men, with a wide range of ages, from twenties to seventies. After the first session, the group is divided up into smaller sections allowing more people a chance to chat in a smaller group. Ruby concludes the meeting with a short closing meditation.

The meetings, which have gained in popularity since the COVID-19 crisis, and often have a waitlist because they fill up, are not intended to take the place of therapy. The aim is not to offer solutions, but to provide a safe and confidential space where anyone can speak openly about how they feel, amongst a supportive group of people who understand what it’s like to feel “frazzled”. (Read more about Ruby, and how it works.)