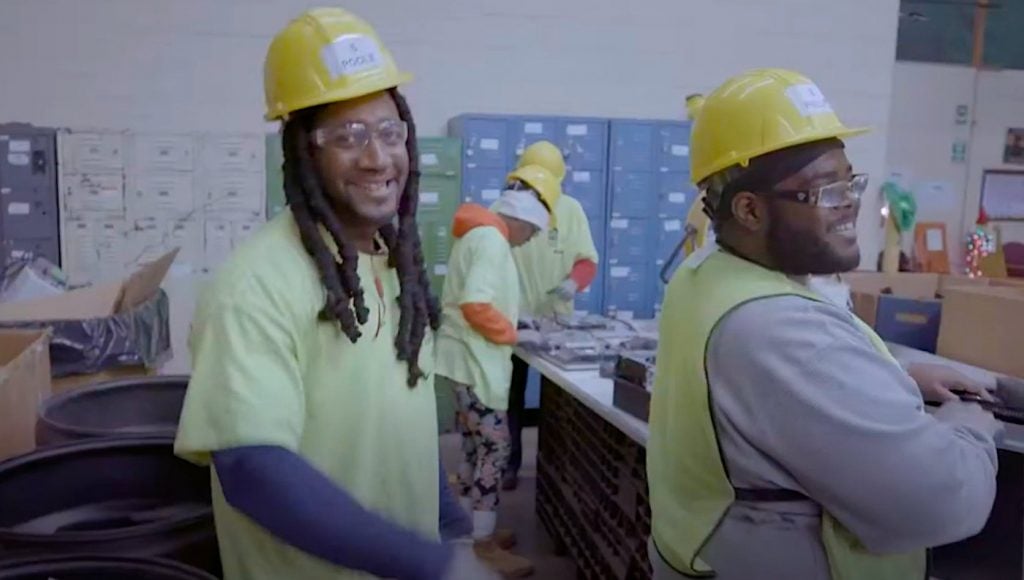 A San Francisco company on a mission to “re-imagine waste” is now providing meaningful work to ex-convicts, making them partners in building a more sustainable world.

But now, Brightmark has partnered with the social enterprise RecycleForce to recycle electronics—and while RecycleForce certainly helps our planet, they also uplift the humans living on it, by training formerly incarcerated men and women transitioning back to society.

“Our main mission is not recycling, at all. Our mission is to help people that are coming out of jail and prison with training, mental health, drug addiction, housing, and then help them get a job,” said program director Andrew King in the video below. “We do that through recycling.”

Many former prisoners who are committed to bettering themselves face great barriers to employment. Difficulty around finding work often leads these people to return to their previous path in life. That’s why RecycleForce’s work is so important, and the results speak for themselves. Only 23% of those who participate in its programs go on to re-offend, compared to 60-75%, the average number nationwide in the U.S.

RELATED: Inmates Are Earning Free College Degrees Behind Bars, And Their Recidivism Rate Plunges to 2%

“RecycleForce gave me a choice—and I picked RecycleForce instead of the street,” warehouse manager Robert Smith said. “And I believe it saved my life. That’s why I’m here today.”

Many people are not aware that 91% of plastic waste in the United States ends up in a landfill every year. Part of the reason for this is that much of it comprises different types of plastics mixed together. Sorting them was time-consuming and difficult—if not impossible—when trying to salvage this waste into something re-usable.

Now, RecycleForce is assisting Brightmark with its mixed-plastics recycling programs. Their plastics-to-fuel process works by breaking down the plastic to the point that it can be made into diesel and various wax products. Brightmark’s new plant in Indianapolis, scheduled to be completed next year, will be the epicenter of its plastics partnership with RecycleForce.

POPULAR: Newly-Developed Enzyme That Breaks Down Plastic Bottles in Hours is On Track to Change the Recycling Game

According to KPC News, “Over the past two years, Brightmark has more than tripled the size of its staff, garnered $150 million in equity investments in its projects, and acquired proprietary technology that will create a circular economy for post-use plastics.”

And, now it’s investing in one of society’s most overlooked resources—her people.

SET This Inspiring Story Free By Sharing it on Social Media, Uplifting Your Friends…