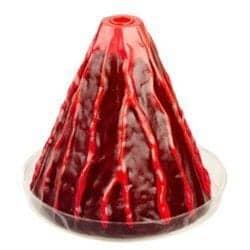 Kids love active science projects – particularly if they’re messy ones! Making an indoor erupting volcano with your kids is a good way to get them hooked on science! With a little preparation, you just follow the instructions to make Volcanoes for Kids.

What is a Volcano

A volcano is an opening in the Earth’s crust which allows the escape of lava and gases from inside the Earth. The word ‘volcano’ comes from Vulcan, Roman god of fire.

Kids will experience the inner workings of Earth as they paint a ceramic volcano model, add the safe “eruption powder” and water, and watch the show!

The National Geographic Fire and Ice Volcano is an exciting light-up erupting volcano lab! By using just a few simple household ingredients, you can create an exciting volcanic eruption! Or fill the volcano mold with water and freeze it overnight to create an ice volcano that erupts and lights up!

Where Are Volcanoes to be Found?

Active volcanoes are to be found in bands across the Earth, at the edges of the Pacific Ocean: the American west coast, the Siberian coast, Japan, the Philippines, and Indonesia, or in island chains that run from New Guinea to New Zealand (the known as the ‘Ring of Fire.’ Active volcanoes are also found in Iceland, the Kenya Rift Valley in Eastern Africa, Italy, and Hawaii. Volcanoes occur near the edges of the large ‘plates’ around the Earth. Explosive volcanoes, such as those of Mount St. Helens and Mount Pinatubo, found where plates are being forced together. The quieter, “effusive” volcanoes, like Iceland and Hawaii, are found mostly where plates are pulled apart or else are in the middle of a plate.

Volcano Making Kit – the eruption can be performed repeatedly and the fun is unlimited!

Around 1500 land-based active volcanoes have erupted in the last 10,000 years.

There are known to have been around 600 erupting volcanoes though history.

There are around 50-70 volcanoes active each year. Around 20 of these are erupting at any one time.

Poster Roman soldier with Vesuvius erupting behind – from UK