On this day 50 years ago, the determined astronauts who averted disaster aboard Apollo 13 landed safely back on Earth after four days fighting for their lives—and NASA is celebrating again, uniting with all its workers orbiting their homes in self-isolation.

Jim Lovell, Jack Swigert, and Fred Haise were on a mission to land on the moon—the third such mission conducted by NASA after President Kennedy had rallied the country for the challenge the decade before.

The 7th crewed mission of the Apollo space program was launched from Kennedy Space Center on April 11, 1970, but the Moon landing never took place. It was aborted after an oxygen tank in the Service Module (SM) exploded during routine tests two days after leaving Earth.

“Houston, we’ve had a problem.” Those were the famous words heard in the control room back in Texas.

The contents of the oxygen tanks leaked into space from the gaping wound in the wall. Without oxygen, needed for breathing and for generating electric power, the vehicle’s propulsion and life support systems could not operate. The smaller Lunar Module (LM), which was built only to land on the moon became the crew’s lifeboat.

Back home, engineers, mathematicians, and designers worked frantically in teams using simulators to figure out the correct emergency measures that would bring the crew home alive.

Although the LM was designed to support two men on the lunar surface for two days, Mission Control in Houston improvised new procedures so it could support three men for four days. But, the crew experienced great hardship caused by limited power, a cold and wet cabin, and a shortage of potable water.

In order to get it pointed in the direction of Earth for reentry, their craft needed to be looped around the Moon.

POPULAR: This is the First Ever Image of a Black Hole and Scientists Are Calling It a ‘Dream Come True’

There was also a critical need to adapt the ship’s cartridges so that the carbon dioxide removal system would work. The crew and mission controllers were successful in improvising a solution—a device constructed using duct tape, maps, and other materials they had on board, as instructed by Houston control.

All three astronauts had been U.S. Navy test pilots, accustomed to working in critical situations with their lives on the line—a fact which some have credited with the ultimate success of the rescue.

The astronauts’ peril briefly renewed interest in the Apollo program as tens of millions watched the splashdown in the South Pacific Ocean on television.

The story of the mission was dramatized, most notably, in the 1995 film Apollo 13, based on the memoir co-authored by Lovell the commander, entitled Lost Moon.

“We would like to invite the NASA workforce and their families to collectively stream the 1995 movie ‘Apollo 13’ on Friday, April 17, at 8 p.m. Eastern.

“This is an inspiring story with much to remind us about perseverance, the importance of teamwork and how our culture of safety has advanced. With employees unable to gather at the centers while most of NASA is teleworking, NASA is bringing the movie to you.” 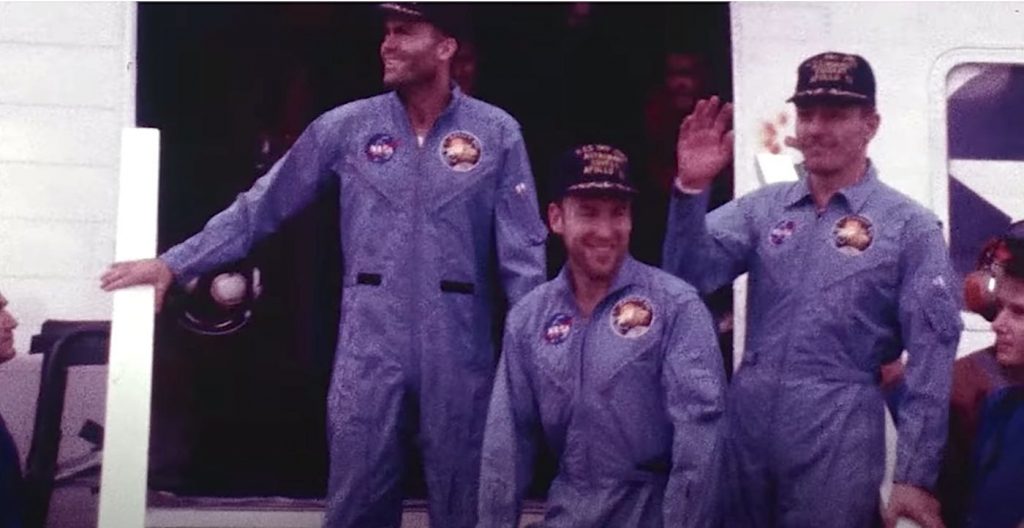 Below is the 50th anniversary video published by NASA on YouTube remembering the teamwork that triumphed over adversity.