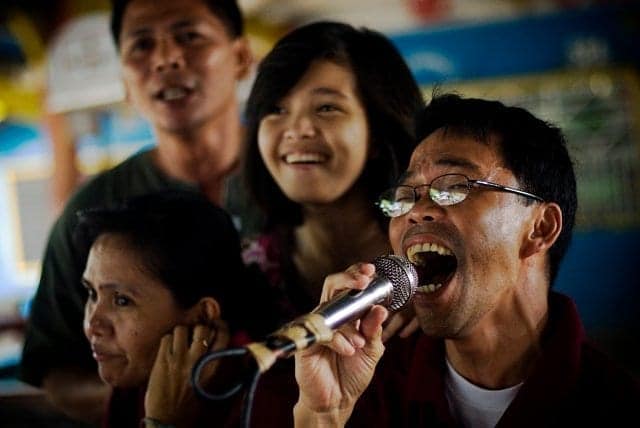 From singing competitions on TV and during fiesta to karaoke sessions at home, Filipinos love to sing. We love it so much that the rest of the world has perceived Filipinos to be great singers. Names like Leah Salonga, Charice Pempengco, Jessica Sanchez, Regine Velasquez, and Sarah Geronimo are known worlwide for their voices. The boom of the Internet and social media age has also paved the way for Youtubers such as AJ Rafael, Kat Badar, Albert Posis, and JR Aquino to share their talent to the rest of the world. Even popstars who are part Filipino like Bruno Mars, Nicole Scherzinger, Vanessa Hudgens, Apl.de.ap, and Enrique Iglesias are voices that you always hear on the radio.

While the topic itself is subjective, we can’t deny that singing is indeed our best forte. Even for Filipinos who think they’re lousy at singing, at least we have enough skill to carry out a tune in mid-range notes and perform in a choir. But why? From our culture to our language, let us explore why are Filipinos so good at singing.

Tagalog is a tonal language

Among the speculated reasons why Filipinos have an affinity to be great singers is the language. Being an archipelago, the Philippines has a great deal of dialects spoken in different parts of the country. What is “langgam” in Bisaya is different from the “langgam” of Tagalog which brings us to the common language of the country. Tagalog is the Philippine’s National Language and is spoken and understood by everyone. It is taught in schools and is the main language used in print, television, radio, or other forms of media.

What links Tagalog with our vocal inclination is embedded in the way we speak. Tagalog is known as a tonal language, meaning each “tone” can change the meaning of words, even if the pronunciation is the same. This is observed in other languages such as Chinese, Thai, Punjabi, and Vietnamese. From a non-native speaker’s perspective, Tagalog and other tonal languages sound like they are singing but with less effort. Because of the change in tone like the common Filipino filler “eh” in “kasi eh”, speakers have a mini vocalization sessions while they speak.

Since Tagalog is a language known by almost every Filipino, you could say that we got our musical prowess from the language. However, the language of the north is not the only tonal language that is spoken in the Philippines, Illonggo, Bisaya (Cebuano), Ilocano, and Kapangpangan are also languages expressed in intonation and different tones.

We are an expressive bunch

Filipinos are very expressive. This can be observed on the way we speak with hand gestures, facial expressions, body language, and even to the extent of making sound effects. If we were any louder, we would be vocalizing notes or performing a dramatic opera. Aside from that, we see singing or karaoke at that, as a form of expression and stress relief. Nothing beats singing and screaming your heart out after finding out you failed an exam or your crush is in a relationship.

Singing in public is acceptable

While the language may be a key factor in why Filipinos are good at singing, another reason could be singing in public. While many Westerners get too self-conscious when they sing in crowded areas, in the Philippines, it is even encouraged! Even if you have a so-so or a lousy voice, people would still encourage you to finish a song and that alone is uplifting.

Among the most common ways to sing in public, aside from school and community events, is through a karaoke or a videoke. It’s like a jukebox with a library of different songs which you can choose to sing, complete with lyrics flashed to the TV and a background of skateboard bails or gorgeous women in bikinis. Celebrations like birthdays, New Year’s and Christmas Eve is marked with your drunk uncle singing “My Way”. Even if you don’t know the lyrics, the tune of the song, or you’re just a tone-deaf singer, singing in public is a-okay.

Today almost all Filipinos have their own smartphone, where they can listen to their favourite music and sing to it using a 3rd party application. The Philippine market have a vary of choices for smartphone such as Â Asus Zenfone Max, Samsung S7, Asus Zenfone Selfie , Oppo A37, Cherry Mobile Flare S4, Vivo y53, Oppo f5 or Samsung J1 2016.

Singing is encouraged and is a part of Filipino culture

With an environment that greatly encourage singing in public, Filipino parents always make their kids sing in front of elder relatives. Parents often have a CD collection of kids nursery rhymes playing as they fall asleep and encourage their kids to sing along with it. Singing is also taught in school as a part of the nursery, preparatory, and kindergarten programs. Aside from that, school activities such as “Buwan ng Wika” and “Nutrition Month” have jingle-making and choir competitions for kids who want to participate.

Remember that time when you’re so embarrassed but your mom still made you sing “Bahay Kubo” in front of your grandparents? You feel so shy but they gave you candy and a few pesos, so it was worth it. In a subtle way, Filipino parents encourage their children to sing even at a so-so level without giving them expensive voice lessons. In a way, we have cultivated a culture where we encourage singing so that those who are good at it excel even better and the tone-deaf ones become so-so.

Partnered with our daily vocalizations through language, and encouragement, the only thing left to tie everything together is our culture. In the Philippines, kids as young as three are encouraged to participate in singing competitions and perform with big voices. That’s why when Ellen featured a great deal of young Filipino singers including Charice to perform, we are not surprised about it. You can hear these talents everywhere in the Philippines, and that’s a good thing.