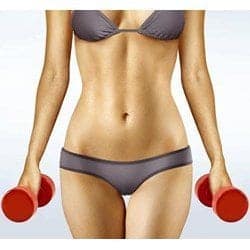 The prevalent perception is that lifting
dumbbells to transform one’s body is an acitivity that belongs to the male
realm. Most people think getting involved in this male habit will weaken the
feminine traits of a woman and give her masculine features that will suit her
identity. Contrary to this widespread understanding of female bodybuilding,
many women around the world spend time training with dumbbells and other
strength building equipment and find that results boost their womanliness
instead of undermining it. To help counter the
misperceptions about female bodybuilding, I decided to discuss the three major myths
on this issue.

Myth 1: Working with dumbbells
will make a woman look bulky like a man: Though it is possible for a woman
to bulk up with intentional workout and nutrition, most woman who frequent the
weight machines section of the gym end up far from getting a body like Brigita Brezovac. For an increase in muscle size, you need to
eat many more calories that you consume and that is something most women will
avoid making it impossible for the muscles to pack on meat. Furthermore, a key
hormone that triggers muscle growth is testosterone and it is found in much
lower levels in women than in men.

Myth 2: Weightlifting does not
burn fat and is useless for women who are only interested in getting thinner: It
is true that most women are interested in reducing body fat levels but that
does not at all change the fact that a pair of dumbbells can bring about
incredible benefits for a lady. Strength training burns a certain amount of
calories per se. Yet, its real benefit is what we call the afterburn effect.
The term refers to the energy consumed by your body while putting thins back in
order after your muscles are exhausted by heavy workout. Indeed, strenuous
dumbbell exercises can throw your muscle tissues into quite a bit of disarray
by consuming energy deposits and hitting muscle fibers. Your muscle tissue will
keep burning calories in the background hours after you put down the dumbbells
in order to fix itself.

Myth 3: Women can hurt
themselves with dumbbells: If you speak to a person who has some seriosu experience
on bosybuilding, the first advice you will get is “safety first”. It is
absolutely correct that we should take every precaution when lifting weights
and that applies to women. However, that does not mean that women are any more
prone to getting hurt lifting a dumbbell or two that men are. All they have to
do is to lift in proportion to their physical capabilities. Usually women have
less muscle strength and endurance than men and they should be lifting lighter
weights, just like a skinny guy lifts lighther weights when compared to the
bodybuilding pros.