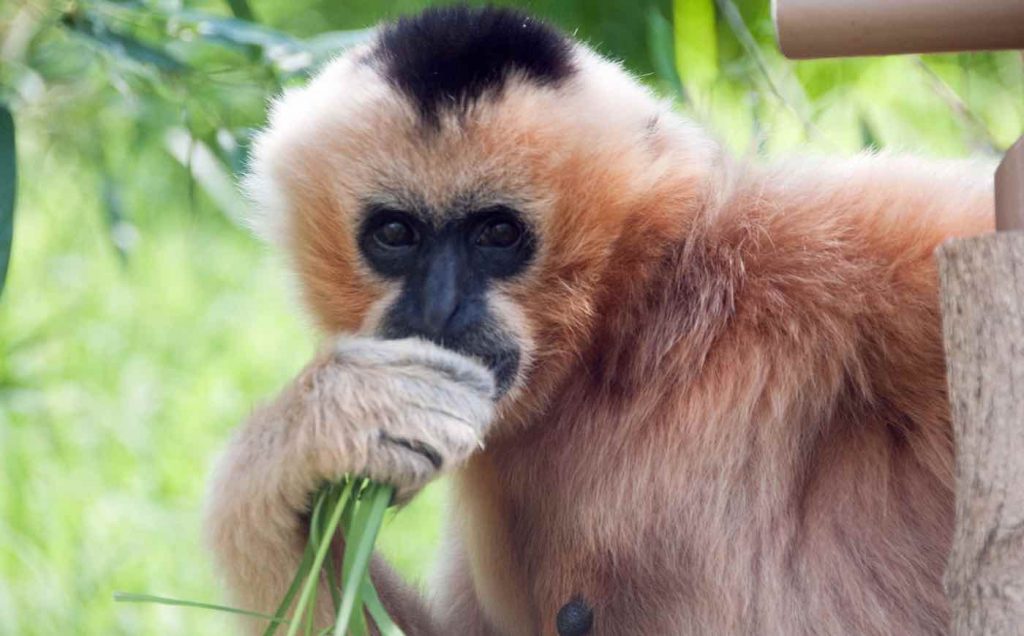 A brighter future lies ahead for the critically-endangered Hainan gibbons of Hainan Island thanks to decades of steady conservation work.

The small tropical island off the coast of China is the only place this charismatic primate is found, and their numbers have increased from just 10 individuals in 1970 to 30 in 2020.

The progress has been slow due to limited quality habitat and a slow rate of birth inherent in the species, but things have improved dramatically from when the conservation project began in 2003, and just 13 wild gibbons were left on the island living in two family groups.

The males’ fur is jet black with white cheek patches while the females flush bright orange when they reach maturity. Their small faces and curious eyes make for a soft countenance as they gaze down on the rare passerby from the treetops.

“They are really intelligent animals. When they look at you, it feels like they are trying to communicate,” Philip Lo Yik-fui told South China Morning Post. Lo is a senior conservation officer at Kadoorie Conservation China which has been the driving force behind the conservation project.

In 2016, a tourist website called Tropical Hainan claimed the Hainan gibbon was the world’s rarest mammal, and that it has survived this long only due to a spooky tale wherein one day a hunter shot one of the last few gibbons on the island and his whole family died of a mysterious disease. After this, hunting gibbons was believed to be unlucky.

Working Together For Gibbons

The two family groups were found living high in the mountains in Hainan’s sprawling Bawangling Nature Reserve. Their habitat was far from ideal, as it lacked the figs and lychee fruit trees that make up a sizable chunk of gibbon-diets.

MORE: Hawaii’s State Bird Soars Back From Brink of Extinction After Only 30 Birds Left on Islands

Since then, Kadoorie has planted 80,000 fig and lychee trees to link existing habitat patches with the fruiting trees to encourage isolated populations to meet and interact.

According to SCMP, Lo says that the goal is to try and get the numbers of gibbons above 50, the mark when they would no longer be critically endangered, but simply “endangered” as designated by the International Union for the Conservation of Nature’s (IUCN) Red List.

“Our biggest goal now is to help expand the gibbons’ territory so the whole species won’t be wiped out if natural disasters occur,” Lo added.

CHECK OUT: Humpback Whale Population Bounces Back From Near-Extinction—From Just 450, to Over 25,000

He said that local forest authorities who were at first cold to the idea of intervention by the Hong Kong conservationists, have now thrown their support behind the project. In January of last year the Forestry Department of Hainan established the Hainan Tropical Rainforest National Park to further secure gibbon habitat.

The 19 species of gibbon on the island have been hunted in the past, but former hunters are being utilized for their knowledge of the forests and of the behavior of the animals and given jobs as conservationists.

“We try and instill a sense of pride in the locals, and the ex-hunters are really satisfied with their work now,” Lo said. “That is the main point of conservation work, it’s just as much about the people. And now people who were on opposing sides are teammates working together to protect the gibbons.”

SHARE This Amazing Conservation News With Your Friends On Social Media…