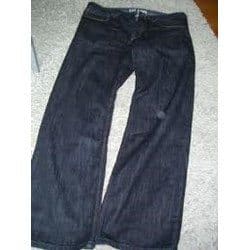 The term jean refers to trousers made from denim or dungaree. Blue jeans were invented by Jacob Davis and Levi Strauss in 1873. But their roots go further back than that! In the early 16th century Italian sailors blue pants made of cotton, wool, and linen. These became very popular because of their durability. Since these sailors were referred to as Genoese (most came from Genoa, Italy), this may have been the origin of the term “jeans” or “blue jeans”. However Genoa was famous for its cotton corduroy, called either jean or jeane and the jeans fabric from Genoa (at that time) was in fact very similar to corduroy, so go figure.

Did You Know?
Genoa was the birthplace of Christopher Columbus
Left

Toward the end of the nineteenth century jeans arrived in the United States and initially, they were trousers worn by factory workers. Men’s jeans had the zipper down the front, while women’s jeans had a zipper running down the right side. This changed to a straight front zipper somewhere in the early 60’s. During World War II they were called waist overalls and worn mostly by off-duty soldiers. The term “waist overalls” stuck until the sixties.

In 1965, Limbo, a boutique in the New York East Village, was “the first retailer to wash a new pair of jeans for a used and worn effect. The idea became a hit. They also hired East Village artists to embellish them with patches, and other touches, and sold them for as much as $200.”

Sometime In the early 1980s the denim industry introduced the stone-washing technique developed by Donald Freeland of Edmonton, Alberta, which helped to bring a larger and more versatile market.

Acceptance of jeans has continued through the 1980s and 1990s and jeans are now a wardrobe staple. The average North American owns about seven pairs.

Looking Good In Your New Jeans