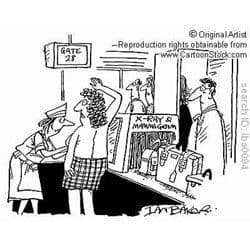 Mammograms Plus Soft X-Rays? A Clearer Picture…Cross My Heart

It is estimated that one in eight women in the United States will develop breast cancer at some point in their life. This risk increases with age, meaning that a woman has a much greater chance of developing breast cancer at 60 or 70 than she does at 40.

Mammograms are commonly used to screen for breast cancer in women with no signs or symptoms, and to diagnose it when an abnormality has been found. A mammogram study examines the breast using low-energy X-rays.

Breast-cancer screening is a controversial topic in the medical community. For more than a decade now, mammograms have been recommended for all women over age 40 even though there is no agreement on how often a woman should have a mammogram and at what age routine screenings should start.

While many studies have demonstrated that screening was associated with early detection and fewer breast cancer deaths, some groups argue that the decrease is not significant and that overuse of mammography for breast cancer screening has caused errors in diagnosis and overtreatment.

These diagnostic errors are what we call false positives and are essentially false alarms. Women with false positive results may undergo tests such as biopsies that were not needed, can cause discomfort and carry other risks.

Recently, the Preventive Services Task Force recommended beginning screening at age 50 and getting mammograms every two years instead of every year. The recommendation is that women in their 40s should decide with their doctors when to start screening based on individual risk factors and preferences.

On the other hand, the American Cancer Society and the National Comprehensive Cancer Network Guidelines recommend beginning yearly screenings at age 40 for all women.

When talking about screening guidelines, it is important to remember that recommendations are made by looking at the benefit in a population, not in individuals.

As scholars in the Comparative Effectiveness Research on Cancer in Texas (CERCIT) research group, we are studying cancer-screening patterns in Texas and investigating associated outcomes.

CERCIT is evaluating both the good and the harmful aspects of over, under and best utilization of screening mammography. We hope that our results will provide useful information for patients and providers to decide on the screening strategy that is right for them.

On the other hand, among women in their 60s, the risk of breast cancer is higher and screening mammography will detect more cancers.

While the controversy over screening continues and given that there is no agreement on the right age to begin getting mammograms, it is important for women to discuss with their physicians the risks and benefits associated with screening.

The decision should be based in large part on patient preferences, risk factors, age and overall health – not blanket screening recommendations.

Meanwhile, Susan G. Komen For The Cure has misled women about the benefits of mammography, two Dartmouth professors charge in an op-ed published in the British Medical Journal.

Dr. Steven Woloshin and Dr. Lisa Schwartz, two researchers with the Dartmouth Institute for Health Policy and Clinical Practice, argue that the breast cancer charity has oversold the potential benefits of mammograms and underrepresented the possible risks. Their criticism was focused on a Komen advertising campaign from 2011.

“Early detection saves lives,” read that advertisement, which ran as part of what the researchers call a national promotional “blitz” during breast cancer awareness month last October. “The 5-year survival rate for breast cancer when caught early is 98 percent. When it’s not? 23 percent,” the ad continued.

“At the time, you couldn’t open up a women’s magazine or newspaper without seeing this ad,” Woloshin told The Huffington Post.

“It kind of drove us crazy, because it gives this survival statistic that’s an optical illusion,” he continued. “It seems to say that [mammography] has this huge effect, and you’d have to be really irresponsible or crazy to not be screened.”

According to Woloshin, the problem is not that mammography screening is without real and potentially significant benefits. It is that the survival statistic used in the Komen ad is unreliable.

On the other hand, research being done at the University of South Carolina has led to a potential breakthrough in detecting breast cancer. A team led by electrical engineering professor Dr. Krishna Mandal has developed a device that detects what are called “soft x-rays”, which don’t show up on current x-ray films or mammograms.

“This can identify this soft x-ray through the breast and with a high resolution,” Dr. Mandal says. “This high-resolution detector, if we can utilize and make it large-scale production, I think it will be an excellent tool for physicians to detect and identify the breast cancer and we can accelerate the growth in breast cancer research.”

It’s an exciting development for Bren Miller. Several years ago, she felt a small lump in her breast. “I honestly just thought it was from lifting weights or something. I mean it was like a little piece of popcorn kernel or something,” she says. She didn’t suspect breast cancer and didn’t go to the doctor.

Later, during a routine mammogram, she told her doctor about it. “I told them that it was there and they came back and they said, â€˜We didnâ€™t get a picture of it at all.â€™ And I go, â€˜Really?!â€™ So they took me back in again, did another shot; nothing showed.”

Because they also felt the lump, they then did an ultrasound and found the tumor. She had surgery and chemotherapy and is now cancer-free. â€œBut if I hadnâ€™t have said something myself, I couldâ€™ve had a clean bill of health, you know, walking out of there and another year couldâ€™ve gone by and I couldâ€™ve been in mega-trouble. Mine was just stage one, but it wouldâ€™ve been very aggressive,” she says.

That’s exactly the kind of thing that’s often missed now but would be detected by Dr. Mandal’s device.

“It’s common for women even under 40 years of age to have calcifications,” he says. “It’s critical to know whether it exists in the tissue and especially whether it’s spreading. But to see that, we need very high resolution detection systems, which is what we’ve made.”

Doctors could use the device to follow the progression of calcifications over time.

He says the device is at least two years away from being able to be used by doctors.

Miller is excited about what the breakthrough will mean. â€œAnything for early detection is just crucial,â€ she says.

So, after weighing in on all of this, what is the bickering over? Money, of course. Well, I’m sitting here currently watching my 35-year old stepdaughter go through this very ordeal. It ain’t at all pretty. First, she had just started a job where benefits weren’t given to her in time ( she was diagnosed before she had finished her probational period ), so, she had no insurance ( how many women fall into that catagory?). If it hadn’t been for acquaintances who got her into a program at the hospital that donates to women without insurance, her ship would have been sunk before she ever set sail. Thank God for putting my wife and her other daughter in a position that they could help her. Where would your daughter be if she got a positive diagnosis? Those are just my thoughts. What’s yours?