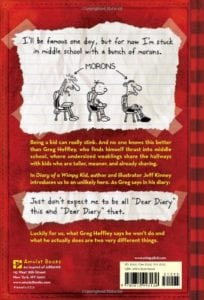 The first books starts out with introducing middle school student Gregory “Greg” Heffley. It takes place over his first year of attending middle school. Early on, the “Cheese Touch” is explained in the book as well. It is similar to cooties but intenser. In the book, the cheese is touched by a boy named Darren Walsh. It gets passed around the whole school. Then later on it goes to Abe Hall, who moves to California while holding onto the Cheese Touch still.

During the first part of the book, Greg and Rowley endure events like playing a tree in the Wizard of Oz play, learning to wrestle and getting through Halloween. On Halloween night during trick-or-treating, Rowley and Greg get ambushed by several teenagers. They make their escape to Greg’s grandmother’s home and taunt the teens from inside by making faces and sounds at them. Greg’s mom gets upset by this and tells them to come home. When they do arrive home, they are surprised at the driveway when Greg’s dad soaks the two of them with water from a trash can.

On Christmas, Greg reports that he doesn’t get many presents that he really likes. The one present he really wanted that he doesn’t get is Twisted Wizard, which is a video game. He gets a red sweater instead due to his parents mixing up the presents, along with a Big Wheel, and 8 x 10 photograph of his uncle. All of the presents that Greg wanted are given to Manny instead. This frustrates Greg even more. While Rowley is riding on the Big Wheel, Greg throws a football at him, which breaks Rowley’s hand. All of the girls at school surround Rowley since he is injured. This makes Greg even madder since he is wanting to get more attention from the girls.

Rowley and Greg join safety patrol. They have to walk all of the morning kindergarten children home. Greg chases the kindergarten children with a worm when Rowley isn’t around. Rowley gets accused since Greg was wearing Rowley’s hat. Greg confesses it was him to Rowley, and then Rowley tattles and gets a safety patrol promotion. Greg and Rowley get mad at one another. They start to drift apart slowly, and Rowley starts spending time with Collin Lee. Greg spends the night at Fregley’s in retaliation. However, the sleepover turns out to be disastrous after Fregley eats too many jelly beans and becomes hyper. He starts chasing Greg with one of his boogers. During the middle of the night, Greg runs back home.

Toward the ending of the school year, “Zoo-Wee Mama,” which is Rowley’s comic strip, gets put into the school newspaper. Rowley is told by Greg that he should be listed as the co-creator since it was his joke punchline and idea. However, Rowley denies Greg having anything to do with the comic strip. Just as they are getting ready to fight, the teens they teased on Halloween interrupt them. They are there to pay them back. At the blacktop, Rowley is forced to eat the cheese. However, Greg lies and tells the bad tempered and angry teens that he’s allergic to dairy products to get away with it. Greg explains on the next day how he removed the Cheese. However, unfortunately, the other students think that meant Greg touched the Cheese, which gives him the Cheese Touch. Greg is secluded from everyone for the rest of the school year. Rowley and him become best friends once again. Although Greg tries very hard to become the “class clown” in the yearbook’s favorites page, Rowley gets the title based on the “Zoo-Wee Mama” comic strip of his. At the end of book 1, Greg claims to have thrown his yearbook away and doesn’t care that the Class Clown title went to Rowley. However, Greg says that if it ends up going to Rowley’s head he will remind him that Rowley was the one that ate the cheese and he will tell the whole school all about it.

Find it on Amazon