Its finally here…. the new Disney Infinity game! Set up like the Skylanders game except full of fun Disney characters.
If your child (or your for that matter) are a Disney fan, you will love this game!
Disney Infinity Starter Pack Sale
To my surprise, I did not see very many commercials for this game prior to its release, even though the Disney channel is often playing in my house on a regular basis. So when I finally heard about this game, I had to do some research about it online prior to buying it for myself.
Below are some of the questions/answers that I had about this game. Maybe you also have some of those same questions, and this page will help you to find the answers you need prior to deciding if Disney Infinity is right for your family.
Enjoy

How Do You Play This Game?

This game is pretty easy to play and most kids and adults will be able to figure it out quite quickly once they get their hands on it. You take the characters and you place them onto the power base. You can put up to two players on the power base at one time. Each character works in their own world.

Please note- each player works in a certain world. For example, when you place Sulley onto the base, you will be playing in the Monsters University world. If you have him on the base and you place Jack Sparrow onto the base, he cannot play within Monsters University. He will pull up and play in the Pirates of the Carribbean world. To play two players IN THE SAME WORLD you must have two characters that belong in that world. (which will require you to purchase additional play sets)

You CAN however play two characters from different worlds at the same time – In the toybox. The toybox allows you to play in a neutral world and it has tons of things in it that you can do.

What’s In The Starter Pack?

The starter pack for DISNEY INFINITY includes all of the following things:

What Consoles Can You Play This Game On?

Disney Infinity can be played on several different consoles. The starter pack is available for all of the following game systems:

How Much Does The Starter Pack Cost?

When this game first came out, no matter which system you wanted it for, the price was the same. Right around $75. I expected that price to remain the same well into the Christmas holiday (or for the next few months AT LEAST) but just the other day, I took a look at the starter kits on Amazon and they were priced under $60.
Today’s Price For Disney Infinity Starter Pack on Amazon.com
Not sure if the price will remain down around $60 or if it will raise back up to the $75, so to answer this question I guess I have to say… somewhere between $60 and $75.

Where Can You Buy This Game?

Disney Infinity starter pack is available at several different retail stores and online as well.
My local Walmart has a display set up in their video game section, as does Target.  You can also find them for sale online at Walmart.com and Amazon.com. 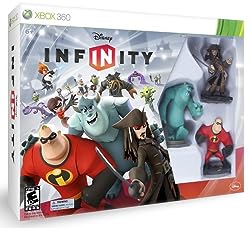