Good news Skylanders fans, the fourth installment of this
uber-successful franchise will hit the shelves on October 5, 2014.
Skylanders 4, aka Trap Team, is slated to be available on the Nintendo
Wii, Wii U, 3DS, xBox One, xBox 360, PS3, and the PS4.

While I am pretty excited to see a new game coming out, I am more
excited about having Toys for Bob back as the lead game designers. They
always produce fresh and exciting adventures that keep us interested for
many, many months. 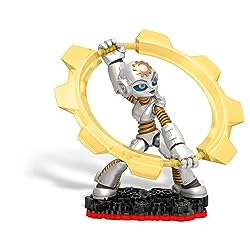 Gearshift is just one of the many new Skylanders characters that will be available once Trap Team comes out.

You will note that the character base for this series is red; which is consistently different than the first three games.

This Skylanders Trap Team character requires the Traptanium Portal (included in the Trap Team Starter Pack) to be used in-game.

All New Characters PLUS Our Favorites Will Return

Along with a few new core characters, in Skylanders Trap Team we are introduced to a new kind of hero; Trap Masters.

These mystical figures are able to harness the power of traptanium, trapping the bad guys in its crystal shard.

The cool thing about this is that once you trap a villain in the
crystal, you can then take that shard to a friends house and use it
there. What this means is that you can actually play this game using the
powers and abilities of a bad guy.

How awesome is that?

So far, I have discovered a few really cool new characters:

So What Do We Know Already?

While it is certainly true that information of this new game has just hit the internet, we do know a few things.

First, Kaos is back and is causing even more trouble than usual. In his
never-ending struggle to rule the Skylanders, he discovered the location
of the legendary Cloud Cracker prison; home to some really bad dudes
and dudettes.

While attempting to ‘recruit’ and build an army of uber bad guys, he
sort of blows the prison up; freeing the aforementioned bad guys and
raining shards of traptanium (the magically substance that keep the bad
guys behind bars) across the realm.