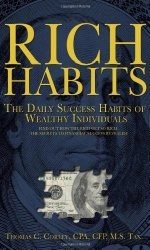 For five years, Tom studied the daily activities of 233 wealthy people and 128 people
living in poverty. He discovered there is a difference the size of the Grand Canyon
between the daily habits of the wealthy and the poor. He understands the challenges
adversity can present but is here to share the good news that we have more control –
we may think!

Rich people feel that they determine their path in
life.
Poor people are significantly more likely to
believe that, genetics, are important to becoming
wealthy, and significantly less likely to believe
that they’re the cause of their own financial status
in life.

Corley explains,
“Most of the wealthy people I talked to were
businesspeople who weren’t always wealthy,”
“but they had this attitude that they could do
anything.”
What Thomas C. Corley- calls “rich habits”
and “poverty habits,” meaning the tendencies
of those who fit in each group.
everyone has some rich habits and some poverty
habits. “The key is to get more than 50% to be rich
habits,”
A goal is only a goal, he says, if it has two
things: It’s achievable, and there’s a physical
action you can take to pursue it.
Rich people believe that they’re the cause of their
own financial status in life.
Corley, explains,

but 67% of them put those goals in writing.

no superior
human discipline or
the wealthy
They just don’t think about watching much TV
because they are engaged in some other habitual
daily behavior — reading.”
They read … but not for fun.
“I love reading.”
Rich people who agree: 86%
Poor people who agree: 26% the wealthy
Fact, 88% of them read for self-improvement for 30
minutes each day, compared to 2% of poor people.
Sure, rich people love reading, but they favor
nonfiction —
the wealthy
in particular, self-improvement books.

only 6% of the wealthy people surveyed found
themselves unhappy because of work.

the wealthy
Many of the people I studied aren’t wealthy
because they made a lot, but because they saved a
lot.” the wealthy
He’s trying to instill what he calls the 80/20 rule in
his own children: Save 20% of your income while
living on 80%.

Corley says it’s related to the idea of creativity
being important to financial success:

Thomas C. Corley says Thomas Corley, the author of “
Rich Habits: The Daily Success Habits Of Wealthy Individuals.”
“These habits are like snowflakes — they build up, and then you have an avalanche
of success.”

During Tom Corley  research, he identified over 200 daily activities that separated the “haves”
from the “have not’s”. The culmination of his research can be found in his #1 bestselling book,
Rich Habits – The Daily Success Habits of Wealthy Individuals.

Tom Corley understands the difference between being rich and poor. At age 9 his family went
from being multimillionaires to broke in just one night.

Print: Tom has been featured in many, prominent print and Internet sites such as; CNN.com,
Huffington Post, News.com.au, Marketplace Money, Success.com, –

Corley, who spent five years monitoring and analyzing the daily activities and habits of people
both wealthy and living in poverty (233 wealthy and 128 poor, specifically), isolated what he calls
“rich habits” — and many of them are simply patterns of thought.
on his website, defines “rich people” as those with an annual income of $160,000 or more and a
liquid, net-worth of $3.2 million or more, and “poor people” as those with an annual income of
$35,000 or less and a liquid net worth of $5,000 or less.
Here are 10 ways Corley, found that rich people think differently, based on statements with which
they identify.
1. Rich people believe their habits have a major impact on their lives.
“Daily habits are critical to financial success in life.”
Rich people who agree: 52%
Poor people who agree: 3%
Wealthy people think that bad habits create detrimental luck and that good habits create
“opportunity luck,” meaning they create the opportunities for people to make their own luck.
“When I looked at luck,” Corley remembers, “a lot of rich people said they were lucky and a lot
of poor people said they were unlucky.”
Good Habits Create “Opportunity-
It takes a lot of hard work, time and sheer dedication.
Although each of them had different a different path, their destination was the same: success.
Every successful leader, entrepreneur or idealist has had their own unique journey as they
strove for what they believed in
There are many factors which tie these successful individuals together, one of them being how
they grew and matured along the journey. Steve Siebold, Author, of “How Rich People Think,”
interviewed more than a thousand millionaires over three decades to learn what led them to their
success and wealth.
The answer was quite simple: Steve learned that it did not matter where they were born, or even
to whom — what really made these millionaires stand out was their mentality, the drive to reach
their goals while letting nothing hold them back. This mindset led these individuals to wealth.
Here are seven sentences you’ll never hear a successful person say because they contradict
that unstoppable attitude.
Related: 21 Traits of Billionaires from Warren Buffett to Mark Zuckerberg
Read: Tony Robbins Shares His Secret to Millionaire Success
Best Advice I Never Got
Wealthy people value their health, says Corley, “One of the individuals in my study was about
68 and worth about $78 million. I asked why he didn’t retire, and he looked at me — He said,
‘I’ve spent the last 45 years exercising every single day and watching what I eat because
I knew the end of my career would be my biggest earning years’ If he can extend his career
four to five years beyond everyone else, that’s about $7 million for him.”
“Wealthy people think that being healthy means fewer sick days, which translates into more
productivity and more money.”
(being rich has everything to do with habits.are simply patterns of thought)
“I found in my research that wealthy people are by and large optimists,”
“They practice gratitude and look at happiness like a habit.”
“Rich Habits: The Daily Success Habits Of Wealthy Individuals”
2. Rich people believe in the American dream.
“The American dream is no longer possible.”
Rich people who agree: 2%
Poor people who agree: 87%
“The American Dream is the idea of unlimited potential,
the vast majority of rich people believed that wealth is a big part of the American dream (94%)
and that the dream is still possible.
Rich people value relationships for professional and personal growth.
“Relationships are critical to financial success.”
Rich people who agree: 88%
Poor people who agree: 17%
Not only do rich people feel that their relationships are critical to their success, but they put a lot
of effort into maintaining them, making a habit of calling up contacts to congratulate them on life
events,
or reaching out just to say hello. “When I applied the hello calls and the life event calls to my own
life,” recalls Corley, “I ended up making another $60,000 as a result.”
Rich people love meeting new people.
“I love meeting new people.”
Rich people who agree: 68%
Poor people who agree: 11%
Hand in hand with valuing relationships comes making new ones. Rich people both love meeting
new people and believe that being liked is important to financial success (in fact, it’s a whopping
95% that believe in the power of likeability, compared to 9% of poor people)
Rich people think that saving is hugely important.
“Saving money is critical to financial success.”
Rich people who agree: 88%
Poor people who agree: 52%
“Being wealthy is not just making a lot of money,” explains, Corley, “It’s saving a lot, and
accumulating wealth.
Many of the people I studied aren’t wealthy because they made a lot, but because they saved a
lot.” He’s trying to instill what he calls the 80/20 rule in his own children: Save 20% of your
income while living on 80%.
their money. “Most of these people were business owners who put their own money on the table
and took financial risks,” explains Corley. “People like this aren’t afraid to take risks.”
They watch their waistline.
“I count calories every day.”
Rich people who agree: 57%
Poor people who agree: 5%
they take care of their smiles.
“I floss every day.”
Rich people who agree: 62%
Poor people who agree: 16%
Rich people believe that their health influences their success.

Perhaps you may find this helpful

Taking business partnering to the next level – CIMA

Senior business partnering roles – as described in this report – are hard to fill. As a result, there
is a real demand for management accountants who, in addition to the core finance and
accounting skills can offer commercial insight and strategic thinking combined with influencing
and, ideally, leadership skills.

CIMA – Chartered Institute of Management Accountants: CIMA is the world’s largest
professional, body of management accountants. We offer the most relevant finance
qualification for business.

-.Institute of Chartered Accountants in England and Wa…

people, skills and roles to drive the change

Understands the difference between being rich and poor-