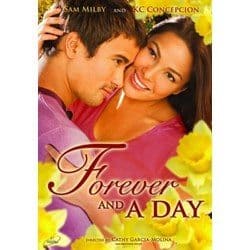 Forever And A Day Review

I decided to watch Filipino movies since I always did this before. I don’t want to revolve myself around work and anything else. Forever and A Day is the one I picked to watch and see. It is starred by Sam Milby and KC Concepcion. I was amazed and glued to my seat while watching this film.

Before, I thought that it is another common or ordinary love story done by Star Cinema but I was wrong. It’s about how long do you love a person who is dying. Anyway, the story seems ordinary to others esp. if they’re into foreign movie like A Walk to Remember but for me, I think this is the first time I’ve seen a filipino movie that had this kind of theme.

If you haven’t watched it then I warn you that it contains a short spoiler but who cares even the care bears don’t care. 😉

Movie Story
Sam Milby or Eugene in the movie is very aggressive as high rank employee in a shoe company. He designs shoes and his shoes are great but very expensive. So the market can’t afford to buy them and his boss had an argue with him. Eugene decided to take a break by enjoying himself with some of his friends. They went to try things like zip lining, rafting and others. That is where he met Raffy (KC). They enjoyed each others’ company until they fell in love. Eugene got to know about the cancer of Raffy. In order to support each other, Eugene made an agreement with Raffy that she needs to see her doctor and take medication while he would still pursue his career and never give up. He fulfilled his promises and returned on the track while Raffy seemed breaking her promise to Eugene. Eugene couldn’t accept the fact but in the end he learned to let go of her. The ending I guess you now have a clue. That’s right, she died but the love between them remains and hoping they meet each other again someday. That’s all!

My Feeling About It

I become inspired after seeing this film. I never thought how KC owned her role and she did a good job. While for Sam Milby, he never fails me to amaze on his acting skills. It seems that he always shows something new to his fans as well as to filipino audience.

I hope Sarah Geronimo and Sam Milby would have a project movie someday. I want to see them on screen and how their chemistry will click to the people.

Read My Other Articles

If you like what you read here, then check my other articles.