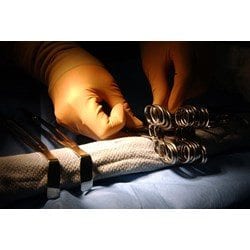 It is important to note that even though obesity is a condition that needs to be a priority for weight management options, bariatric surgery can have adverse effects. Health risks from surgical weight loss procedures include such things as heart disease, stroke, hypertension, diabetes, osteoarthritis, gallbladder disease, vascular problems, or respiratory disorders.

Gastric Lap Band Surgery
The lap band technically is a laparoscopic adjustable gastric band which is a inflatable silicone device that is placed around the top portion of the stomach in order to treat obesity.To qualify a person must have a body mass index of 40 or greater.
Since this procedure is a drastic step for weight loss management, obesity suffers experience risks from the gastrointestinal surgical operation. Gastric banding is performed using laparoscopic surgery in which the stomach and intestines are left in tact allowing for absorption of nutrients from food the gastric bands used are made of biocompatible materials. So it is able to stay in the body.

Gastric bypass after effects may include irritated stomach tissue which can cause discomfort or pain, or the band may migrate through the stomach wall to the inside. studies show that some have experienced the lower part of the stomach may prolapse through the band causing an enlarged upper pouch.
Other risks include the malposition of the band which would make it impossible for restriction of the passage of food. Then there can be problems with the port and tube connecting to the band, if this happens the port may get disconnected from the tube causing internal bleeding and infection.
Gastric Bypass Surgery Side Effects
As you are probably aware one of the most notable side effects of gastric surgery is due to the band restricting the passage of food there is also a reduction of calorie and nutrient absorption.This is due to the procedure causing the food to bypass the stomach where most of the absorption of iron and calcium usually occur many end up experiencing anemia, osteoporosis and other nutrition deficiencies.

Most are not prepared with the life adjustment they will face after surgery that will require patience and a new way at eating food. Studies show that a lack of adequate protein may lead to depression, anxiety, irritability, or other mental health conditions.

Some physical health issues may lead to gallstones, colds, headaches, low blood pressure, anemia, irregular heart rates, or death. Consulting a doctor to do lab tests to measure the amount of protein in the blood is recommended.
Foods that can be eaten after adjustable gastric lap band surgery is not what you may have been used to eating before your surgery. It is beneficial to take small bites, as well as eating very slowly. It will take time to get used to the new stomach which will only be able to accept protein shakes and foods that is blended, similar to the consistency of baby foods.
Acid Reflux Problems
Acid indigestion commonly known as heart burn because some experience pain that rises in the chest all the way to the neck, or throat, many associate heartburn with regurgitation of gastric acid which is the major symptom of gastroesophageal reflux disease. Apple cider vinegar has been a home remedy used to treat acid reflux symptoms.

Disclaimer: This is for informational purposes only, it is not intended to treat, diagnose or take the place of health care practitioners. It is recommended to consult a doctor before taking any medications.

What is Lap Band Surgery?

It is important to note that a laparoscopic adjustable gastric band, is a lap band. It is an inflatable silicone device that is placed around the top portion of the stomach, via laparoscopic surgery, in order to treat obesity.

It has been reported that the adjustable gastric band surgery is an example of bariatric surgery designed for obese patients with a body mass index (BMI) of 40 or greater or between 35 to 40 in cases of patients with certain comorbidities that are known to improve with weight loss, such as sleep apnea, diabetes, osteoarthritis, GERD, Hypertension as well as high blood pressure, or metabolic syndrome.

What is Gastric bypass Surgery ?

Gastric bypass procedures (GBP) are operations used to treat morbid obesity to help treat the health problems excess weight can cause. Studies show that bariatric surgery is the term used to explain all the surgical treatments for obesity, not just gastric bypasses, which make up only one class of such operations.

As you are probably aware gastric bypass first divides the stomach into a small upper pouch and a much larger, lower remnant pouch and then re-arranges the small intestine to allow both pouches to stay connected to it.

Also it is apparent that any GBP leads to a marked reduction in the functional volume of the stomach, accompanied by an altered physiological and psychological response to food.

In the case of the resulting weight loss, which is typically dramatic, will reduce comorbidities.

The long term mortality rate of gastric bypass patients has been shown to be reduced by up to 40% however, complications are common and surgery-related death occurs within one month in 2% of patients.

In the case of the resulting weight loss, which is typically dramatic, will reduce comorbidities.

The long term mortality rate of gastric bypass patients has been shown to be reduced by up to 40% however, complications are common and surgery-related death occurs within one month in 2% of patients.