75 years ago today, the inspirational United Nations Charter was signed by 50 countries in San Francisco, a document that began with the following: “We the peoples of the United Nations, determined to save succeeding generations from the scourge of war, which twice in our lifetime has brought untold sorrow to mankind, and to reaffirm faith in fundamental human rights, in the dignity and worth of the human person, in the equal rights of men and women and of nations large and small…”

Together, the 50 nations that had declared war on Germany and Japan in WW II, representing more than 80% of the world’s population—people of every race, religion and continent—all determined to set up an organization which would preserve peace and help build a better world.

Including delegates, staff, and advisers, 3,500 in all, and more than 2,500 press people and observers attended what was called the San Francisco Conference—one of the most important events in history and, to date, the largest international gathering ever held.

The delegates debated what would be in the founding document, and got through their monumental work in exactly two months, adopting it in their last meeting at the city’s Opera House. Lord Halifax presided, and presented the final draft of the Charter, saying, “This issue upon which we are about to vote is as important as any we shall ever vote in our lifetime.”

In view of the occasion’s significance, he suggested an alternative to voting by a show of hands, and so every delegate rose and remained standing. So did everyone present, the staffs, the press, and some 3000 visitors, and the hall resounded to a mighty ovation as the Chairman announced that the Charter had been passed unanimously.

Addressing the final session, President Truman said, “The Charter of the United Nations which you have just signed, is a solid structure upon which we can build a better world. History will honor you for it… You have won a victory against war itself. . . . With this Charter the world can begin to look forward to the time when all worthy human beings may be permitted to live decently as free people.”

It was signed on June 26, the following day. (Photo above shows the Chairman of the Delegation from Syria, signing the UN Charter – United Nations Photo) But, because the Charter had to be approved by congresses or parliaments, four months later, the mission was accomplished and the United Nations came into existence. Below is the preamble:

“WE THE PEOPLES OF THE UNITED NATIONS DETERMINED

* to save succeeding generations from the scourge of war, which twice in our lifetime has brought untold sorrow to mankind, and (read more)
* to reaffirm faith in fundamental human rights, in the dignity and worth of the human person, in the equal rights of men and women and of nations large and small,
* to establish conditions under which justice and respect for the obligations arising from treaties and other sources of international law can be maintained,
* to promote social progress and better standards of life in larger freedom,
* to practice tolerance and live together in peace with one another as good neighbors,
* to unite our strength to maintain international peace and security,
* to ensure, by the acceptance of principles and the institution of methods, that armed force shall not be used, save in the common interest,
* to employ international machinery for the promotion of the economic and social advancement of all peoples, HAVE RESOLVED TO COMBINE OUR EFFORTS TO ACCOMPLISH THESE AIMS.”

MORE Good News from this Day:

And, on this day in 1959, the 370-mile long St. Lawrence Seaway was officially opened, marking the completion of one of the greatest engineering feats of the 20th Century. After 50 years of talks between the U.S. and Canada, the system of locks and channels took five years to construct, spanning the difference of 224-feet in sea level rise to help oceangoing ships move cargo between the Atlantic Ocean and the Great Lakes—the heart of American manufacturing.

Queen Elizabeth, representing Canada, opened the Seaway with US President Dwight Eisenhower aboard her Royal Yacht Britannia in Montreal. As crowds cheered and waved flags, church bells and fireworks rang out, and all the sirens and horns in the harbor wailed. The two heads of state were each presented with a commemorative book with the names of the 22,000 workers who built the Seaway—“the great joint enterprise between our two countries”.

Also, on this day in 1963, John F. Kennedy pronounced the now-famous line, ”Ich bin ein Berliner” (I am a Berliner) during a speech in West Berlin. 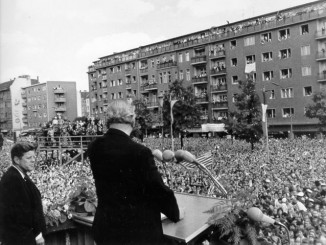 With the remark, Kennedy declared support for the “besieged city” of West Germany 22 months after Soviet-supported East Germany erected the Berlin Wall to prevent any exodus to the West. The message was aimed as much at the Soviets as it was toward Berliners, whose families were separated, and was a clear statement of U.S. policy in the wake of the Communists’ construction of the Cold War Wall. Considered one of Kennedy’s best speeches, it was a great morale boost for West Berliners who lived in an enclave deep inside East Germany and feared a possible communist occupation. Spoken before an audience of 450,000, Kennedy said, “Two thousand years ago, the proudest boast was civis romanus sum [“I am a Roman citizen”]. Today, in the world of freedom, the proudest boast is “Ich bin ein Berliner!”… All free men, wherever they may live, are citizens of Berlin, and therefore, as a free man, I take pride in the words “Ich bin ein Berliner!” WATCH the short speech…