90 years ago today, the Chrysler Building opened to the public in New York City. Constructed by Walter Chrysler, founder of the automotive company, the Art Deco skyscraper served as the corporation’s headquarters and lifted up the languishing East Side of Manhattan from 1930 until the 1950s.

With its silver spire, it became the tallest building in the world for 11 months, measuring 1046 feet (319 m)—but it is still the tallest ever made from brick. Outside the corner points of the 61st floor are eight polished steel eagle heads, perched like hood ornaments—and decorating the 31st floor are replicas of the 1929 Chrysler radiator caps.

Though the architect was William Van Alen, Mr. Chrysler overrode the designer’s vision of a round top, and ordered stainless steel-covered sunbeam arches shining on triangular windows on a pointy terraced crown. WATCH a video about the building narrated by Chrysler’s grandson… (1930)

In 2007, it was ranked ninth on the List of America’s Favorite Architecture by the American Institute of Architects.

And, on this day in 1994, the Nobel prize winning author Alexander Solzhenitsyn flew back to his native Russia after 20 years of exile in the United States. The 75-year-old was given an emotional homecoming greeted by 2,000 people bearing flowers and gifts, reported the BBC. Imprisoned by Stalin for ten years for political dissent, Solzhenitsyn was later stripped of his citizenship and expelled from the Soviet Union in 1974 for attacking the regime  in The Gulag Archipelago. In 1990 Mikhail Gorbachev restored his citizenship and treason charges against him were dropped.

And, on this day in 1963, The Freewheelin’ Bob Dylan album was first released. His second album, it showcased a quantum leap in Dylan’s songwriting talent that propelled him to international fame, with songs like Blowin’ in the Wind; Don’t Think Twice, It’s All Right; and, A Hard Rain’s A-Gonna Fall. The LP established this Minnesota youth as the leader of the singer-songwriter tribe, and a musical muse for the 60s protest movement. The disk even went to No.1 on the UK charts.

Also, on this day in 1977, ‘Declan McManus’ made his live performance debut in London as Elvis Costello. 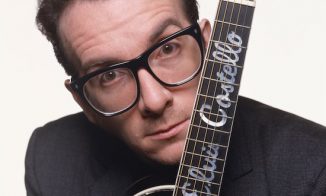 The prodigious singer songwriter’s first 3 albums–including his critically acclaimed debut, My Aim Is True–all appeared on Rolling Stone’s list of the 500 Greatest Albums of All Time. WATCH a cool video of his Top 10, including “(What’s So Funny ‘Bout) Peace, Love and Understanding…