Happy 85th Birthday to Uruguay’s Jose Mujica—the ‘World’s most humble president’. The 40th president of Uruguay became legendary for giving 90 percent of his salary to the poor, choosing to live on his austere farm (instead of the presidential palace), and using an old VW Beetle to get around town. He left office in March, 2015 due to his country’s one-term limit for presidents. (1935)

And, on this day in 1908, the beloved actor Jimmy Stewart was born. Any number of his movies are included among the greatest American films of all time, particularly Mr. Smith Goes to Washington; It’s a Wonderful Life; Harvey; and the Hitchcock-directed Rear Window, and Vertigo. Known for his distinctive drawl and down-to-earth persona, he often portrayed middle-class men struggling in crisis. Equally at home in Westerns, thrillers, biographies, and family films, he also had keen comedic timing, as seen in The Philadelphia Story, for which he won his only Oscar among five nominations. 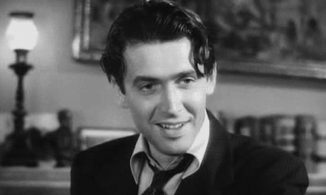 Married for 45 years, he also won honors in war—as a World War II pilot and Vietnam War veteran—rising to the rank of Brigadier General in the Air Force. He sacrificed 5 years in the prime of his acting career to serve his country. Not only that, he had been offered a safe post, as all celebrities were (because their death would be a huge blow to the nations’s morale), but he refused and instead flew more than a dozen dangerous bombing missions. WATCH a tribute, or see his personality shine during his 1980 acceptance speech…

Happy Birthday to Cher, who turns 74 years old today. The actress, dancer, and singer has sold over 100 million records.  In more recent news, she paid for a shipment of water to the people of Flint, Michigan, whose water became contaminated. (1946)

And, on this day in 1916, the first Norman Rockwell painting appeared on the cover of The Saturday Evening Post. The oil on canvas, Boy with Baby Carriage (or ‘Home Duty’), was an instant success. 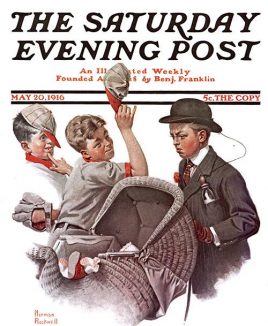 Although he got his start at age 18 when he was hired as a staff artist for Boys’ Life magazine, it was this illustration that propelled Rockwell on the road to financial and artistic success, and popular acclaim. When he got the cover, he crooned: “Two million subscribers and then their wives, sons, daughters, aunts, uncles, friends. Wow!” he said, when the possibility of a Post cover arose. He accomplished the coveted feat at the age of twenty-two.

Among the best-known of Rockwell’s works are the Four Freedoms, a series that illustrated President Franklin Roosevelt’s vision for why America would fight in WWII. Born in New York City, and living most of his life in Stockbridge, Massachusetts, the artist produced more than four thousand original works in his lifetime. He also wrote an autobiography, My Adventures as an Illustrator, and is noted for his 64-year relationship with the Boy Scouts. Rockwell passed away in 1978 at the age of 83.

Happy 71st Birthday to children’s author Mary Pope Osborne, best known for her award-winning Magic Tree House series, who turns 70 years old today. With more than 55 different stories in the time-travel adventure series, the chapter books written for readers ages 6–10 have sold more than 134 million copies worldwide in 35 languages. An advocate and supporter of children’s literacy, the Oklahoma native is also coauthor of the companion Magic Tree House Fact Trackers series with her husband, playwright Will Osborne, and her sister Natalie. WATCH a 2017 video about the 25th anniversary of Magic Tree House… (1949)