180 years ago today, Peter Ilyich Tchaikovsky, the iconic Russian composer was born. Famous for his ballets like The Nutcracker, Swan Lake, Romeo and Juliet, and The Sleeping Beauty—he also wrote popular classical works including the famous 1812 Overture (the one with the cannon fire often played on Independence Day).

He became the most popular Russian composer of all time, and the first whose music made a lasting impression internationally, bolstered by his appearances as a guest conductor in Europe and the America, until his death at 53 years old. WATCH a short bio to hear a couple highlights… (1840)

With 20 employees, and later taking the name Sony, they built Japan’s first tape recorder. In 1955, Sony’s transistor radio cracked open the U.S. market, launching the new industry of consumer microelectronics–with teens being the biggest users. Sony’s genius also set the industry-wide standard for professional video cameras and recording with its Betacam format in 1982, which is still in use today, particularly in television news gathering.

(*Continued from above) The 9th Symphony was the composer’s first on-stage appearance in twelve years; the hall was packed. Beethoven was several measures off and still conducting when the orchestra finished. 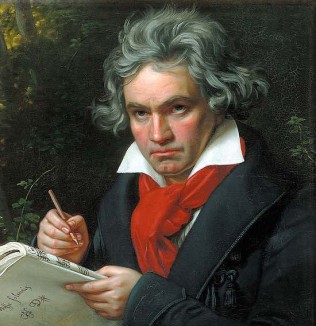 The contralto Caroline Unger walked over and forcibly turned Beethoven around to accept the audience’s cheers and applause. According to one witness, ‘the public listened to his wonderful, gigantic creations with the most absorbed attention and broke out in jubilant applause, often during sections, and repeatedly at the end of them.’ The whole audience acclaimed him through standing ovations five times; there were handkerchiefs in the air, hats, raised hands, so that Beethoven, who could not hear the applause, could at least see the ovation gestures. The theater house had never seen such enthusiasm in applause.”

It includes part of the poem, An die Freude (Ode To Joy) by Friedrich Schiller: Glad, as his suns fly Through the Heavens’ glorious plan, Run, brothers, your race, Joyful, as a hero to victory. Be embraced, you millions! This kiss for the whole world!

In Modern Day Odes to Beethoven’s Ninth, the symphony is used as the official anthem of the European Union; students in Beijing’s Tiananmen Square broadcast the symphony through loudspeakers during their 1989 protest as a statement against tyranny; and a famous performance conducted by Leonard Bernstein on December 25, 1989 celebrated the fall of the Berlin Wall.

And 301 years ago, and celebrated today, the city of New Orleans was founded by Jean-Baptiste Le Moyne de Bienville of the French Mississippi Company. 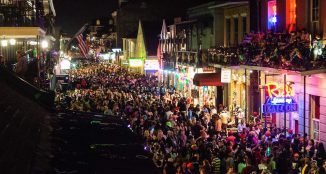 It was named for the French city of Orléans, and became a major U.S. port known for its multilingual Creole culture and cuisine—and, of course, for the music. The birthplace of jazz is Bourbon Street in the French Quarter. With its annual Mardi Gras and Jazz festivals, ‘The Big Easy’ has become the most unique city in America. (1718) – Photo by Craig Stanfill, CC license

And, on this day in 1861, Rabindranath Tagore, the Indian poet, writer, musician and artist who reshaped Bengali culture, was born. 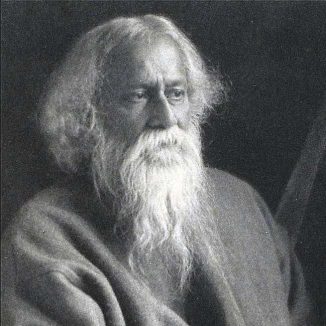 Author of the beautiful verse Gitanjali (Song Offerings), he became the first non-European to win the Nobel Prize for Literature in 1913. Sometimes referred to as “the Bard of Bengal”, Tagore’s spiritual poetry, elegant prose, and magical drawings modernized the Bengali arts world by spurning rigid classical forms and resisting structure. Both India and Bangladesh use his songs as their national anthems.

Also on this day in 1919, Eva Perón, the First Lady of Argentina beloved by millions as a champion of the poor, was born. Impoverished as a child, “Evita” took charge of the Ministries of Health and Labor after her husband Juan was elected president in 1946. 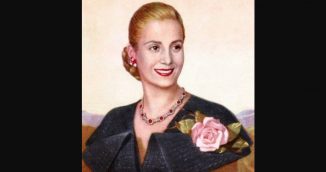 She devoted a huge amount of time to meeting with poor Argentinians, visiting hospitals and orphanages, giving money, medicine (and hugs and kisses) to the poor and sick. Her Eva Perón Foundation distributed 500,000 sewing machines, 400,000 pairs of shoes, and 200,000 cooking pots annually—and handed out toys at Christmas to 4 million children. It also funded the building of hospitals, schools, and housing for homeless women.

During her six years in office, Eva Perón also championed women’s suffrage until females did get the right to vote and run for office. Her career and life was cut short by cancer at age 33, but she was honored like a fallen saint by the Congress and three million weeping people in Buenos Aires attending her state funeral.

Not only has she been featured on national coins and currency, many Argentinians view her as an actual saint, hanging her photo on the wall next to the Virgin Mary. Indeed the Congress before her death gave her the title ‘Spiritual Leader of the Nation’. Cristina Fernández de Kirchner, the first woman elected as President of Argentina (in 2007), claims that women of her generation owed a debt to Eva for ‘her example of passion and combativeness.”

Her fame also transcended continents in the 1970s, when Andrew Lloyd Webber produced the stage musical ‘Evita’, and worldwide fascination was revived again in 1996 with the musical film starring Madonna.