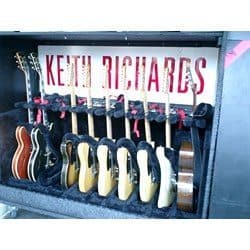 Ever wondered about a certain Keith Richard Guitar

Keith Richards has many different guitars and each has it’s own unique style and sound. I am going to talk about some of my favorite Keith Richards Guitar gear and how each guitar has been used and it’s features.

While this could be a never ending story, I have always found Keith’s guitars to be fascinating. Did you know that the Keith Richards Guitar Collection is one of the biggest in the world with somewhere in the neighborhood of three thousand guitars? Yep, you read it right, three thousand of them. I thought I was doing good with ten.

I am plan on adding more and more to this page as I discover more about Keith Richards guitar collection, so please keep checking back.

Micawber is maybe the most famous Keith Richard Guitar. It is definitely one of his trademark guitars. Many people have asked about Keith Richards Guitar tuning and Micawber is one of the guitars where Keith has always had it tuned to a Open G tuning (G,D,G,B,D) low to high with no capo. He has had it this way since Exile on Main St.

Micawber is a blonde 1953 Fender Telecaster and is named after a Charles Dickens Character. Why? Good question. Better ask Keith.

Additionally, this a signature keith richards 5 string guitar. Yep, he was famous for this one by only having 5 strings on it.

Malcolm. This is another of the finest keith richards guitars

Malcolm is a naturally finished, 1954 Fender Telecaster. It is kept in an open G tuning as well and is also another of the famous keith richards 5 string guitars.

Here is a shot of more guitars in the Keith Richards Guitar Collection. Notice the wide array of styles and makes. He has been quoted as saying, “I probably have too many guitars, since I only have one pair of hands”. Hmmm, I think he may be on to something.

I wonder if the dog plays guitar too? Looks like he really wants in on the action. 🙂

Where is the Museum?

In 2008, Keith Richards announced he wanted to open a guitar museum. Keith currently has a collection of around 3,000 guitars and was talking about showing them off to the public because he â€œdoesnâ€™t have the time to play all of themâ€.

Richards, one of the most famous 64-year-old rockers around, said: “Iâ€™ve probably got too many. I have 3,000 guitars and only one pair of hands. Itâ€™s an incredible collection of beautiful instruments but I only play about ten of them, and guitars have to be played.”

He then stated, “Maybe I will give them away or make a museum.”

He also spoke of perhaps giving some of them away because he was given them as gifts himself. He also mused on the fact that he did not understand why everyone had given him these guitars because he thought he did not deserve them. Think again Keith, you have given the world more music than we can ever repay!

Does anyone out know if he did actually open a museum? If he did, I would travel to wherever he opened the museum to see that collection.