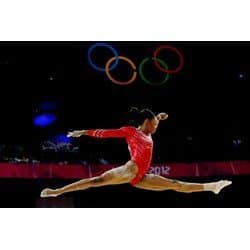 As another Summer Olympics rolls on, I have to admit, as a lifelong sports fan ( my tv stays on espn most times ), I have found myself watching these Olympic Games a lot closer than I ever have. Maybe it’s because I’m getting older, or maybe it’s because nothing else is on. But it’s not that I’m watching it, period, it’s the fact that I’m pretty much watching ALL of the events ( still minus a couple that I won’t mention ). But, in particular, I was watching the gymnastics. I usually watch it in the past, but I was glued to it this time, for some strange reason. To me, there are no Nadia Commanichi ( I think that’s how you spell it ), or no Mary Lou Rettons. They were very exciting to watch, whether you liked the sport or not. But, as I’ve been watching, I noticed little Gabby Douglas. Wow, she looks young I thought. Yeah, like 16 I later found out. And although the team was kicking butt, together, when it came to the individual competition, that’s when you started to hear about Gabby’s hairdo. What? Hairdo? Those young ladies are working their posteriors off, and all some folks have to talk about is their hairdo’s ( I’ve later discovered that they were talking about all of their choice of hairstyles, but that’s not what was initially said ). Please. All of you non-sportsplaying individuals. Because take it from me, anyone who has ever played the game, that would be THE LAST THING that they would have a problem with. So, for ALL of YOU nonathletes who are obviously the ones who have a problem with it, go stick a sock in it. Can’t we just all watch and enjoy? That’s what I’m about to do. But that’s just my opinion. What’s yours?

Put A Little Balance In Ur Life