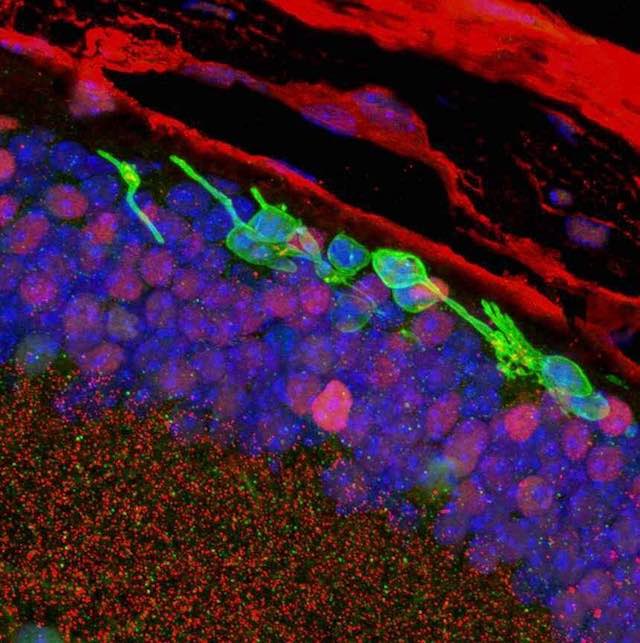 Reprinted with permission from World At Large, a news website which covers politics, nature, science, health, and travel.

Age-related macular degeneration (MD) is a variety of ocular disease that affects so many millions of people, it’s downright characterized as nothing more than the process of aging.

In fact, the study of MD has proven itself to be so fruitful for understanding aging as a whole, MD has become one of the first places that scientists have looked to in order to attempt to repair the damage of aging and restoring youthful, or normal function.

Now in a new paper published in Nature, researchers demonstrate an alternative to stem cells by creating replacement photoreceptors from skin fibroblast cells via pharmacological-conversion—a process that promises to be cheaper, faster, and unburdened by ethical and legal restrictions.

Containing the genetic code for every protein we need to build and repair our cells, DNA can become damaged over time through the stresses of life. Similarly to how scratches or cracks in a CD prevent lasers from reading the information on the disk, damaged DNA becomes difficult, and even impossible for our RNA (which you could imagine as the laser inside the CD player) to read the genetic information contained therein.

“The photoreceptor is the neuron in the eye that turns on visual circuity in response to light which enables us to have vision,” says Sai Chavala, Ph.D. and author of the new paper.

The loss of photoreceptors can result in MD and other retinal diseases that lead to irreversible blindness. In this new study, however, cells called fibroblasts can be chemically reprogrammed to produce photoreceptor-like cells that are now shown to restore vision in mice.

Fibroblasts are cells that help maintain the structural integrity of connective tissues, and a reduction in fibroblast cell count leads to wrinkled skin.

Sai Chavala and colleagues from the Center for Retina Innovation in Dallas, Texas, found a set of five compounds that can drive embryonic fibroblast cells to convert themselves into retinal, rod-like, photoreceptors in both mice and human cells.

“Stem cell-based strategies are extremely exciting,” Dr. Chavala tells World at Large, but adds that generating these cells can be cumbersome and time-consuming. Describing his strategy of chemically reprogramming existing cells as a ‘breakthrough,’ Chavala added that the generation of the photoreceptors using his method requires “a fraction of the time”.

In the study, these converted photoreceptors were transplanted into the eyes of 14 blind mice to see if they would restore vision.

Owing to their nature, mice with working vision prefer dark spaces, and so a test of whether or not the transplant was a success was fairly straight forward; create a bright space and a dark space and wait to see which one was preferred by the mice.

Six mice were found to not only have restored visual function and reflexes—notably in the pupil—but they also preferred to spend their time in the dark space. Chavala hypothesizes that it could have been down to how many of the chemically-reprogrammed cells survived the transplant into the retina that determined whether vision was restored in the mice or not.

What makes interventions like these—which involve creating brand new cells to replace the damaged ones—so effective and exciting in the field of aging is that they present an alternative to natural replication by bypassing the difficulties that our own cells have with trying to repair themselves from DNA that features double-strand breaks or other blemishes.

Reasons to be hopeful

Adding that these conversions of fibroblasts to photoreceptors has also been done in humans, Chavala detailed why he believes the treatments and future research to spring from this discovery are going to change the field of ophthalmology.

CHECK OUT: In ‘World First’ Blind People Have Their Vision Restored Thanks to Stem Cells From Deceased Organ Donors

“ We […] believe this can be a game changer in the field of regenerative ophthalmology. We also believe this is a platform technology and have already started establishing protocols to generate retinal ganglion cells valuable for patients suffering from glaucoma,” says Chavala.

In addition to bypassing the ethical and political restrictions and hiccups with using embryonic human stem cells, the process takes two weeks, costs less, and is more scalable than using stem cells.

WATCH: Hundreds of People Are Being Cured of Blindness Every Day With Cheap, Minutes-Long Surgery

“It is intriguing to postulate that the addition of other molecules or modifications to the culture conditions can yield other types of neurons beneficial for a variety of neurological diseases,” he adds, discussing possible alternatives to photoreceptor generation from fibroblasts.

Finally, Chavala is rapidly approaching human trials and hopes to have an FDA-approved treatment out the other end of the pipeline in 2-3 years, saying he is “thrilled” with the possibility of allowing millions of people to regain their lost vision.