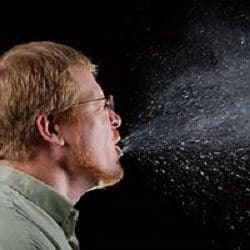 Yes, it’s flu and cold season again, and while the picture to the left isn’t any fun, it’s a strong reminder of the importance of cover our mouths with our shirts and elbows to prevent the spread of these annoying winter diseases.  But the reality is people don’t.  How do I know?  Simple: Look at any doctors office or emergency room during the winter and you’ll see they are backed with those that are suffering form these two illnesses.

No not all strands are the same, but that’s why it’s important to do the simple things and take precautions to prevent the spread of them to strangers and everyone that you come in contact with during the winter months.  That includes more than just family and friends.  It includes those in stores, cashiers, the woman walking by you and everyone else that you don’t typically think about.

Colds and flues spread because we don’t take time to do what they’re trying to make us do…rest.

Neither flues
or colds are any fun.

So you didn’t head the warning and it’s already to late and you have that flu and cold that I was talking about…what now?  Well the simple suggest is to go to the doctors.  That suggestion is especially true if you have the flu.  But very often people are more then a little reluctant to go in for two very simple reasons: the cost and the wait.

Consider that going to the doctors can cost you less and can also be faster if you decide to use an alternative to the doctors office or the emergency room.

The solution is urgent care.  Urgent cares are designed to get you in and get you seen quickly.  Most doctors offices and E.R.’s aren’t.  Part of the reason and way that urgent cares are able to do this is because of the simple fact that they make same day appointments.  They can book you after the hours that your normal physician will see you.  And they won’t tell you that it takes 3 weeks to get in.  That one always makes me laugh, because I’m well in 3 weeks why would I need to see a doctor then.

They cost less because they aren’t the high price of emergency room doctors, even though most if not all have been trained to do that job.  What that means to you is the same skill set, with a fraction of the price.  That makes it a win-win situation for you.  Consider the next time you need to see a doctor, that an urgent care may be the perfect solution for you.

Going to an urgent care will insure two things...
You’re seen quickly and you get the help you need!

While you may not like to hear it, in most cases the way to heal from having a cold or a flu is bed rest and fluids.  That means you need to slow down and take it easy.  I also know that it’s not always possible which is why the pharmaceuticals have a billion dollar over the counter business going.  Because the reality for millions is that they can’t afford the time off and so they take medications that will suppress their symptoms.

I get it, but I also get that suppressing your symptoms doesn’t stop those flues and colds it allows for them to be spread.  And the truth about it for you is this: you take longer to heal.  You really aren’t getting ahead when you take the medications, you’re taking longer to heal.  And that makes avoiding bed rest and liquids the wises of the two options.

Bed rest and fluids are
the two most important things to do when you get the flu or a cold!