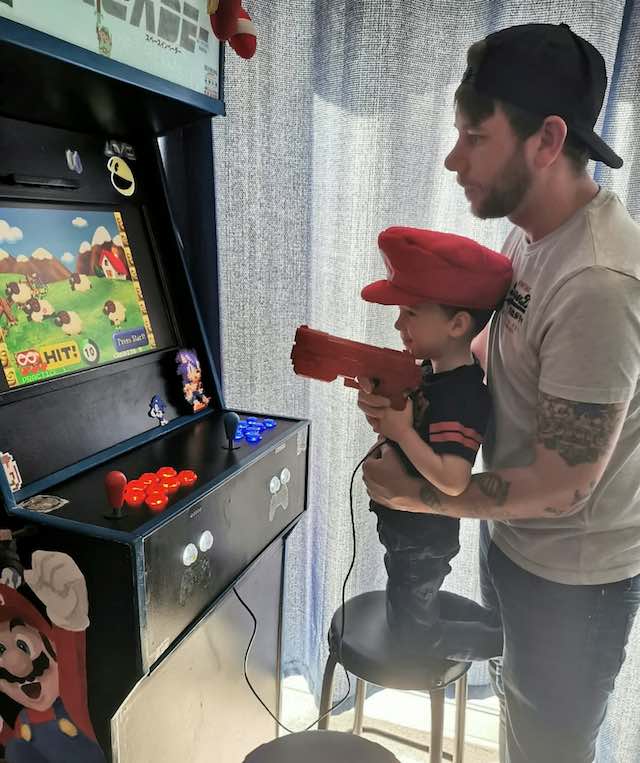 This devoted dad has built a full-size retro arcade machine featuring classics like Sonic and Mario for his son to play during lockdown—and he did it all for less than £150 ($185).

Despite having zero DIY experience, Addison used an old Atari computer as well as arcade buttons and wood purchased off of eBay for his painstaking project.

Felix can now enjoy Sega and Nintendo classics such as Pac-Man, Pong, Tetris, Space Invaders, Street Fighter, Mortal Kombat, Super Mario, Spyro, Crash Bandicoot, and Sonic the Hedgehog from the comfort of their home, as well as 500 other retro video games.

Addison, who is an assistant manager at McDonald’s, said he decided to embark on the ambitious project after being placed on furlough due to the closure of the fast food restaurant.

“I knew it was inevitable that we were going into lockdown so I made a start just before self-isolation rules fully kicked in,” said Addison.

“I’ve always kind of wanted an arcade machine, but when I suggested the idea to my wife, she kind of laughed me out the room. My DIY capabilities were little to none, so she thought something would wrong, cutting off my finger or something.

“It got to the start of March and I just wanted a little project to keep my mind focused on something and keep me busy since I knew work would be shut.

“It was a slow process at the start because I was still at work, but when we went into a lockdown, that’s when I got it all finished off,” Addison continued. “It took about two weeks to plan and a week to build. Most of the games are ones I have fond memories of that I wanted to share with Felix.

CHECK OUT: You Can Now Tour 2,500 World-Famous Museums From the Comfort of Your Own Sofa

“The little man and I have been on it pretty much every day since.”

Addison is pleased with how the end product turned out, although his 29-year-old wife Kerry, an NHS mental health nurse, had her doubts about the idea. Felix, on the other hand, got fully behind the project and helped to pick out his favorite characters to include as part of the colorful paint job.

“I painted all the characters individually myself. There’s a few of them which my little boy chose,” said Addison. “He recognized ones like Pikachu, Mario, Crash Bandicoot and I added ones like Ryu and Link from Legend of Zelda. He loves seeing all those characters come to life.

“Cutting out the pieces, sanding it all down and joining them together took me about two days,” the Lincoln dad continued. “It was the specs of it all that took the most time because I’m not a joiner—not in any way, shape or form. I work at McDonald’s, I’ve not got any skills in this area, so I took my time with it.

“I made sure I planned everything quite meticulously and stuck to them.”

The machine runs off a simplistic computer called a Raspberry Pi, which was developed to be used in schools to teach children about programming.

“They have released programs for the Raspberry Pi that let you allow you to run and emulate games,” said Addison. “We are on Bubble Bobble quite a bit; he likes the little dragon on that and it’s quite simple for him.

“Quite often I find him on it because he’s figured out how to switch it on, pick a game, and get cracking with it. He’s really switched on and clever,” mused Addison. “He’s got a cracking little button-bashing technique and somehow he manages to kick my arse every time.

“I’ve got a couple of educational games like Sesame Street and there’s a Winnie the Pooh game. Funnily enough, he is not as interested in those because they are educational, but he still goes on and from time to time.

“Spyro, Crash Bandicoot and Sonic the Hedgehog he loves, which is one of my childhood heroes, so it’s nice to see that my son now enjoys it as well.”

Addison says that since buying a similar arcade machine brand new would cost more than £1,000, he has already had offers from friends to build them their own versions, which he is happy to do after developing a newfound passion for woodwork and joinery.

“The wood comes to about £50, the arcade buttons came to £40 and were just from eBay. The Raspberry Pi computer is a refurb model I found from eBay for £25,” says Addison. “I walked past an old table in my garage, so I started to make a second tabletop version too, and that is nearly done.

“When work reopens, I’m going to put it into my staff room for my colleagues to play on their breaks.

“I find it quite flattering that people think I have DIY skills, but I can guarantee them I don’t. I struggle with DIY. I like working with computers mostly. I put my mind to it, got it done and got a really good outcome from it.

“Because I’ve had that much passion towards it, my wife thought it might be good for me to do a joining and carpentry course in college, which is a great idea for me.

“I loved doing it and sharing it with everyone. It was nice to see people’s reactions when it was online and it just made me feel really proud.”