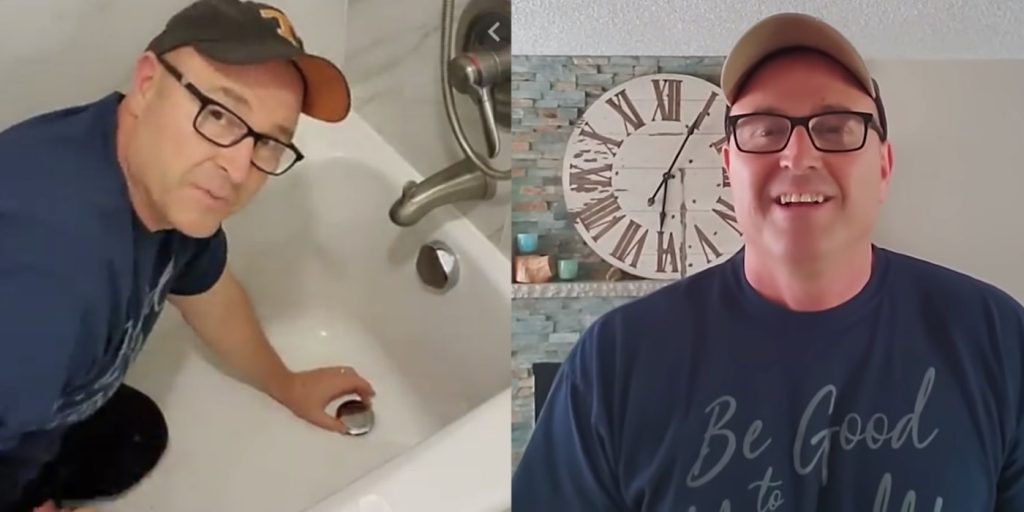 A Bellevue, Washington man who knows what it’s like to grow up without a father has been doing his part to make a difference in the lives of kids today who are in the same boat—and from the surging popularity of his YouTube channel, it’s clear he will be among the dads most showered with love this Father’s Day.

Rob Kenney wanted to step in to fill the void whenever a kid needed to learn how to do something—like change a car’s oil, put up a shelf, use a stud-finder, and even iron a shirt or shave your face.

His YouTube channel, called ‘Dad, How Do I?’, aims to teach youth the valuable lessons a father is meant to teach. Launched only two months ago, his DIY channel already has more than two million subscribers. Fans can now count on Mr. Kenney whenever they get into a jam, using his step-by-step instructions for jumpstarting a car or unclogging a sink.

His most recent videos were posted simply to express his astonishment and gratitude over the number of fans that have been piling up since news outlets like Good Morning America and People magazine featured him in stories. His loyalest fans began telling him to monetize his good fortune.

“I didn’t start this to make money,” Rob told his viewers. “I started simply enough and thought I was going to help a few people . . . 30 or 40 subscribers . . . it’s turned into way more than that. And please don’t think I am only aiming this at young men. It’s for young women, anybody who feels that they need to learn something or be empowered to learn something.”

Now that his channel has had such unexpected success, Rob told fans in a thank-you video that he plans to give his earnings to a number of international charities.

Many viewers have been touched by the kind and heartfelt words Rob shares in his videos. Such simple words, like ‘I love you’ and ‘I’m proud of you’ that so many children don’t get to hear from a father figure, can have a profound impact, even into adulthood. He starts each video with an enthusiastic ‘Hey kids!’—but Keiha Danaher commented that she was a 33 year-old woman, and she answered back with a sobbing “Hi dad.”

RELATED: When 8-Year-old is Left Without Escort to Daddy-Daughter Dance, Kind Officer Steps in As Her Date

Rob’s awkward charm in evident in each video that includes a (bad) dad joke like, “When is a good time to go to the dentist? 2:30.”

He playfully teases his audience in his ‘How to tie a tie’ video, letting them know that a short tie will make them look ‘dorky’, and taking the time to really show them how to do it right.

Rob‘s challenging childhood story makes him a role model of resilience for the kids who watch his channel. By the age of 14, his parents had divorced and decided they were done with parenting. He had to move in with his older brother and learn the tough lessons of adolescence without parents in his life. But that did not deter him from marrying, having a son and daughter, and being a devoted father to his children.

MORE: After 4 Years of Sending Messages to Her Late Father’s Phone Number, She Suddenly Gets a Reassuring Text Back

The downtime the coronavirus lockdown provided was the impetus for him to finally start his YouTube channel, a long-held dream. This, in itself, shows his viewers that there is always opportunity in the face of adversity.

In a video where he manages to change a tire in just 13 minutes, Trisha Wells commented, “This man deserves an award for the internet’s best dad.” Of course, Rob is not interested in awards, just doing his part to be there for kids who need a father figure.

Impressive as his car maintenance skills may be, his dedication to showing kids some encouragement these days means far, far more.