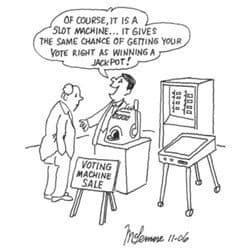 What Do You Mean I’m Not Registered To Vote Here?

Yes. You read it right. Now I received notification in the mail about 2 months ago that my previously registered voting district had been moved. Where, is the first thing that I thought? Well, as it turns out, it was about 2 miles further from my house than I had previously been going. That wasn’t a problem. The only problem I would have was if that polling place that I had been going was still operating as a polling place at all. As it turns out, it wasn’t, I found out later. But, the big problem, to me at least, was the fact that my wife wasn’t on the list at the new place where I had been instructed to go. What? We have the same address. She’s been at that address longer than I have. There had to have been a BIG mistake. So, I texted my wife of the situation. She eventually made it to the poll, and after some extensive searching, they found her, and she was allowed to vote. That was a LOT of work, just trying to cast our vote. It made me think of a lot of folks who still have the audacity to say that their vote does not count. Hopefully, I won’t hear that again, any time soon, because I’m going to let them have it. I heard on the news that down in Detroit, at one of the many polling places, a security guard actually started patting down people who’d come down to vote. I can only imagine how many others they scared off. Please. Your vote doesn’t count. It did many years ago when your ancestors were getting killed, beat, and jailed for attempting to do so. And it does now. Don’t get it twisted. That’s just my thoughts. What’s yours?