It may have been “just another day at the office” for a New York City firefighter who rescued a 4-year-old girl from a burning apartment building, but 37 years later, he’s learning just how big a difference he made.

After the fire in 1983, Deirdre Taylor’s family moved away from New York. As the decades passed, any hope she had for meeting and thanking her rescuer grew more remote—even as her longing to meet him endured.

She had tried to find him online over the years, but without success.

“I didn’t know if he was still alive, particularly after Sept. 11,” Deirdre told the New York Daily News. “Part of me thought I waited too long to track him down.”

Dierdre is a nurse today, living with her husband and children in Virginia. Recently, she decided to ‘pay it forward’ in New York City, returning to save lives on the frontlines of the pandemic.

Because she did that, Dierdre finally found the man who saved her life—Eugene Pugliese, Jr.

She brought along a newspaper clipping about the fire in 1983, with a picture of  Eugene, from Ladder Company 20, holding a little girl in his arms. The headline reads: ‘Fireman braves flames, rescues SoHo 4-yr.-old’. 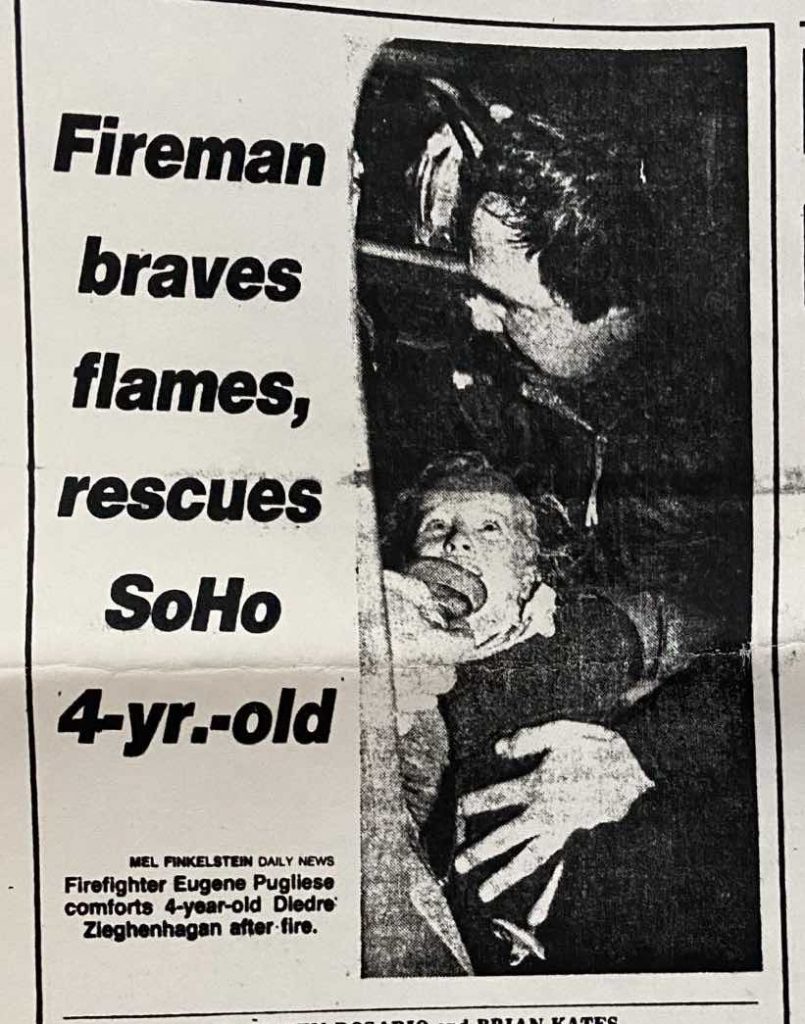 Two weeks ago, Deirdre was working the evening shift at the hospital when a group of firefighters paid a visit to thank all the healthcare workers. She decided to ask them if they knew the man in the photo.

One of them answered, “Oh, Gene. I know Gene. I’ve got his number in my phone.” An hour later, she received a call from Eugene, and learned that he had never forgotten her.

Now 75, Gene remembers the day vividly. “I didn’t even have gear on. I had a helmet and an axe,” he told the Daily News. First, he found Deidre’s mother. She pleaded with him to save her baby too. His crew brought the mother to safety, and sure enough, he found Deirdre a few minutes later.

Because Deirdre saves lives from a contagious virus, she can’t see Eugene in person. But they have promised to meet as soon it is safe. In the meantime, Deirdre is counting her blessings.

RELATED: Heartwarming Photo Captures Man’s Gesture of Gratitude Towards the Nurses Who Saved His Wife’s Life

“I always knew I came close to losing my life that day,” Deirdre told CNN. “Without him, I wouldn’t be here. I had a second chance at life, thanks to him.”

SHARE the Inspiring Rescue Story With Friends on Social Media…