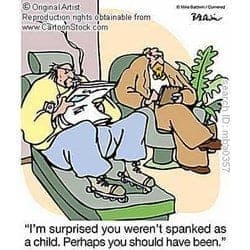 Spare The Rod, Spoil The Child

Temptation’s all around
You’re itching to get in it
You dare not though
Consequences being you’ll get it.
You spare the rod
You spoil the child
The Bible teaches this
A lack of and they may grow up buck wild.
From teachers to neighbors
Or anyone who was a grownup
They all had unspoken permission to unleash
Whenever and wherever you slipped up.
But there were always a few
Who didn’t require as much
Just the threat of a butt-whipping
Really kept those few in touch.
And as for all the rest
I’m not saying their heads were hard
They’d slip up once in a while
Only to be confined to the yard.
And if penalized to confinement and a whipping
They really had screwed up bad
But once the grownups were through with them
They’d wished they never had.
Which is why most kids today
Act the way that they do.
The law has gotten involved
And the law don’t allow you to punish the way they used to.
But take this advice from me
And your kids will turn out just fine.
Don’t let anyone tell you that you can’t
When it comes to whipping your kids’ behinds.
‘Cause when we were growing up
Of whippings we had our share.
Seemingly every move we made
Someone from the village was right there.
‘Cause it takes an entire village to raise a child
But today the village walls have been knocked down.
Take a good look at the current situation
The main wall, daddy, is not around.
And as for the rest of the village
They are into their own thing.
They dare not say anything to many kids
Or a whipping they may end up taking.
Then the establishment wonders why
There’s such an increase in teen violence
Spare the rod, spoil the child
It’s not at all rocket science.

I wrote that poem a few years ago. Why are we still debating how YOU raise YOUR kids? The government, who has their hands full with the war overseas, the economy, and the joblessness in this country, are at it again MEDDLING in domestic affairs. Not in my house! I was raised a certain way, and I turned out well, so why tinker with a tried-and-true way of raising kids? This is what I did. I raised my two kids, albeit from a distance because their mother and I weren’t together through those times ( which incidentally didn’t stop me from being a hands-on parent ). I was there at every turn. I taught them what I could, disciplined them if I had to, and raised them pretty much the way that I had been raised. The only difference was that anything that I didn’t like as far as how I was raised, I tweaked. And the main thing to instill in that type of environment was respect and fear. Respect what I say, and fear the butt-whipping if you messed up. And I went a notch farther. We used to just get whipped. When I had to whip my kids, which turned out to be not too often, I always explained why, just one of my ‘tweaks’, cause in my time, there would have been no explanation. The main thing is, train your kids at home, and all should be well. A well-trained kid doesn’t throw tantrums in the store because they can’t get what they want. Tap them on their butts if they need reminding. That’s what you’re supposed to do. And for all those who would say that you can’t, why not? What law? Spanking YOUR child isn’t child abuse. Beating YOUR child is. There is a difference. And if you don’t teach them that there are consequences for disobedience, guess who will? The police. Just my thoughts. What’s yours?