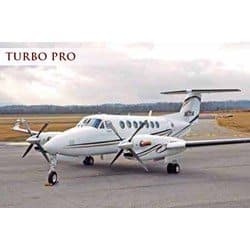 I love to fly and I love most everything about it.  Yes, I know everyone is different, and there are those that don’t really care for it, but I do.  We took a flight about 3 years ago, my daughter was six.  She’s the type that you don’t want to have on the flight with you.
I’ll never forget it, we were coming in for a landing at San Francisco’s main airport.  If you’ve never flown in there, you may not be aware of the fact that when you come in for a landing it’s over the water.  My daughter (Savannah-Rose) was not aware of this little factor, so out of no where she chirps, “we’re not gonna make it, we’re gonna land in the water”, not once, but several times.  The plane was a prop engine, just like the one in the photograph.
Now, if you’re a nervous flyer she is not the one to be next to.  If you’re not, you got a chuckle out of it, understanding her age, and the little she had probably flown.  It’s one of the reasons that I look forward to the day that I can have a personal or chartered flight.
They have advantages that normal flights (public) don’t have, which is what I’m going to write about.  Some of the advantages to having a  chartered plane.
Where not gonna make it...
we’re gonna land in the water!

There is something to be said for the life of flying privately.  Okay, really there’s a lot to be said about the life of flying privately, but lets look at some of the things that are objects, or areas of stumbling for those that fly public.
First, they claim that the there is no customer service on flights any more, this can take the form in many ways!  Everything from the flight attendant being rude, to the lines being to long.  Or maybe for you its that the food is horrible.  Or maybe it’s that for anything over 2 pieces of luggage, they charge you extra. This are all concerns and valid one, and flying private can solve all of these problems.
Here’s how:  Flying private, leaves when you arrive and there are no long lines, or embarrassing and degrading inspections that you have to submit to.  You simply arrive, board your plane and take off.  You  don’t have to be searched and you don’t have to worry about how much luggage that you are carrying on, and having extra charges for them.  You simply board.  Yes, there’s always weight limits, for safety, but you’re not going to be worried about it, because you all have packed reasonable.  Which means, there’s no extra charges for your 5 suitcases.
You get your own personal flight attendant.  She or he has not come fresh off of the press, you see, they’ve had to have so many years of previous flight experience.  They then follow that up with additional training, for special service.  If for any reason they don’t complete it, they aren’t accepted as a personal flight attendant.
Flying Private
gets you the extra attention and time that you need to prepare for that important meeting.

Also, if you’re a private business person or famous, these flight attendance know how to leave you alone, in order that you can get the business done, that you need to get done!
You can get the size of aircraft that you need.  That’s why most professional and college sports teams have private jets.  It’s cheaper.  And consider that you can afford one as well.  Oh maybe not to buy it, but I was able to find private flights for 440 dollars, that’s it, that’s only 2 people flying!  For the convenience of having your own flight.  Remember, the private industry has been hit by the depression as well.  That means that they’re willing to do things, that they might not otherwise do.
It's no longer about taking what the big company's say you have to take...
you can call the shots with your own private jet charter!