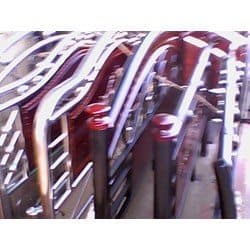 Motorola is widely recognized as one of the best managed in the USA. The firm is dominant in its paging and cellular telephone equipment markets, and its chip business faces demand that regularly threatens to outstrip its production capacity. Much other firmâ€™s success has been attributed to its habit of â€˜doing things by the numbersâ€™. The company was the first large corporation to win the Malcolm Baldrige National Quality Award, in large part because of its emphasis on â€˜metricsâ€™. In fact, Motorola even named its quality program â€˜six sigmaâ€™ to reflect the measure of defects the company sought to achieve in its operations. Six Sigma is a statistical term that implies only one defect per million units produced. It sometimes seems to outsiders that the only things that matter to Motorola managers are the quantitative factors that can be measured and managed â€˜by the numbersâ€™.

However, the company has decided to spend an estimated $600 million annually by the year 2000 on training and educating its workforce better. This is not only more than Motorola has historically spent; it is far beyond that invested in training by any other firm. But perhaps what is most surprising about this decision for those who know Motorolaâ€™s â€˜by the numbersâ€™ culture, is the fact that the decision to make this gargantuan investment is based almost entirely on â€˜softâ€™ analysis. Granted, a study was done several years ago to try to quantify the value of training and development, but the difficulty of doing so quickly became obvious, and the $600 million decision was not based on the quantitative study. Instead, it was based on the observation and experiences of key managers and reflects a qualitative understanding of how the business works. Gary Langely, manager of human effectiveness for Motorola, explains, â€˜we take it on faith and strong belief that it is improving our bottom line.â€™ Gary Tooker, the firmâ€™s CEO explains his support for the investment by arguing, â€˜if knowledge is becoming antiquated at a faster rate, we have no choice but to spend on education. How can that not be a competitive weapon?â€™

While Motorolaâ€™s mangers may be driven by the numbers, they clearly understand that not everything important to a business is easily quantified, and they are willing to go beyond quantitative analysis when the situation warrants.