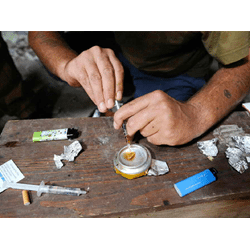 Regions of America with the Highest Rates of Heroin Abuse

The
United States is in the worst heroin epidemic in its history, affecting several
regions from coast to coast. Heroin and opioid pain pills have killed more than
125,000 people in the last ten years, and according to federal data more than
75,000 pain pill abusers will continue to turn to heroin every year. The link
between heroin and prescription painkillers such as Percocet, Vicodin, and
Oxycodone is that they all contain compounds derived from or similar to opium.  During a U.S. state hearing in May, Joseph
Rannazzisi, deputy assistant administrator of the Drug Enforcement
Administration, stated, “Heroin is just a symptom of the prescription drug
problem.”  Heroin is much less expensive,
costing $4-$10 a dose, compared to prescription pain medications, which cost $40-$80
for an eighty milligram opiate pain pill.  The National Institute on Drug Abuse states
that surveys have shown that 80 percent of recent heroin addicts have switched
from opioid pain pills.

Although
the entire country is facing an epidemic, with continually rising fatalities,
some sections of the country fare worse than others.  In the northeast, Pennsylvania, New Jersey,
New York, Delaware, Maine, Rhode Island, Maryland, Vermont, Massachutetts, and
Connecticut have the highest rates of heroin addiction.  Of these, Baltimore is cited by the U.S. Drug
Enforcement Agency as having the highest per capita heroin addiction rate in
the country, with as many as one in ten of the city’s residents struggling with
heroin addiction. Due to its high drug trafficking, the local police departments
have become eligible special federal assistance. Eastern Massachusetts ranks
the highest number of emergency room visits due to heroin use.

The
northeast states are not alone in their fight against the rising use of heroin.
It has also hit the mid-western states hard. There has been a lot of talk and
coverage on the recently passed Heroin Crisis Act in Illinois.  The bill was passed to help those addicted to
heroin by putting certain policies into effect. A few issues covered are: all
first responders must be trained in the administration of the antidotal
medication for heroin overdose, the antidotal medication is given out to
government agencies at no cost, extra educational funding on heroin/drug abuse,
and assistance within the courts to keep heroin addicts out of jails and get
them into treatment.  The heroin
addiction and overdose epidemic has also been reported in staggering numbers in
Knoxville, Tennessee, and Ohio.

Heroin
abuse, addiction, and overdose have spiraled out of control.  It is more than a problem solely in our inner
cites. Increasing amounts of heroin overdose deaths are reported in suburban
and rural communities near Chicago and St. Louis. According to federal
statistics, Espanola, New Mexico, and the outlining suburbs consistently rank among
the top in the nation for drug overdoses. As early as 2001, New Mexico started
distributing Narcon, the antidote to heroin overdose and in 2007 began giving
out Narcon nasal spray instead of needles. They also passed a law that same
year granting immunity from prosecution for possession to people who call 911
or bring someone to a hospital to save a life from overdose. Heroin continues
to be the drug of choice in this region of the country, despite some of the
earliest efforts to understand and deal with the rising epidemic.

To
make matters even worse, powder heroin can also be snorted, reducing the fear
of injecting it. This has expanded the drug use and addiction to a whole new
generation.

The
heroin epidemic is a problem that we, as a country, cannot ignore.  It has been a topic of discussion among
governors and the presidential candidates.  According to the White House Office of National
Drug Control Policy, prescription drug use (sister to heroin abuse) is the
country’s fastest growing drug problem. The Obama administration has committed
over $10 billion for support of educational programs and to expand access to
drug treatment rehabilitation facilities.

If you or a loved one is struggling
with heroin addiction, there are many avenues that are becoming more and more
readily available to get the help you need. Please do not wait until it is too
late.  Great Oaks Recovery Center near Houston, TX is an inpatient/outpatient drug treatment center that comes highly recommended. They are accredited by the Joint Commission and accept most insurances.