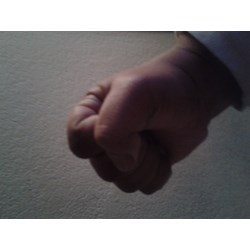 Bullying is bad. It has been happening since ancient times. It happens to people from all age groups, races, and has/is experienced by both sexes. Also, it happens to people who come from different walks of life, from the very poor to the very rich. Everyone who has been bullied is called a victim.
The bully themselves come in all shapes, sizes, races, age groups, professions, and can also be male or female. The bully is called the perpetrator, which means that they are commiting an act of wrong doing. There are different types of bullies. Here are some categories of bullies:

1)Bullies who make nothing but verbal threats (verbal assault).
2)Bullies who commit acts of violence such as: beating people up (hitting, biting, kicking, scratching, etc.).

3)Bullies who threaten and carry threats out with violence.
4)Bullies who use body language to scare others, especially if they are bigger than everyone else.

5)Bullies who use different types of sign language to threaten others (i.e. holding their own fists in front of the victim’s face).

6)Bullies who like to instill fear by letter only, and may even have friends pass the scary letter around in class, until the victim is the one who receives the letter.

This by the way also happens in elementary school. This happens to both children and adults. People can also be bullied for purses, lunch money, being handicap, because of their intelligence (stereotypical nerd), being a high achiever, their gender, sexual preference, race, social status (i.e. popularity at scool), beauty, stature, etc.
Bullies also bully people because they acted on a “dare”, because they may feel a person is not “active enough”, doesn’t have an “active enough lifestyle”, and for absolutely no reason at all.
Bullies can be strangers. Furthermore, they can also be family members. This can be especially bad for the victim. It could even bother this person into adulthood. It can be just as bad if the bully is a stranger or classmate.
There are bullies in the corporate world as well. Examples of this are: bullying that can lead to a hostile takeover by a business, bullying a person to finally leave their place of employment, bullying to get people to step down as a leader/ CEO of a company, etc., bullying by bill collectors, etc.
Now we have cyber bullying! Bullying can affect people in many ways. It can cause the victim to have all kinds of behavior. At times the victim’s actions can lead to fatal results.Victims can end up having low self-esteem, to starving themselves, and can eventually end up doing the fatal part: suicide.
All of this is awful. What is also bad is when the victim does not speak of their encounter. Any type of bullying can affect any person psychologically. Sometimes deeply and sometimes on the worst level. Another bad thing about bullying is when others are knowledgable about the incidents and choose not to do anything about it.
In some schools, there are teachers that don’t want to do anything about bullying incidents, which leaves parents to decide what to do about the situation. Some parents take their children out of the school system completely and end up home schooling their child/children, for their child’s/children’s safety.
To add, some victims of bullying get so tired of getting bulied that they become their own “vigilantes”, taking matters into their own hands by taking their loved one’s or whoever’s weapon, bringing it to school, and totally take out the bullies, teachers, and/or the other bully participants.
In the past, in some schools bullies were not tolerated. Punishments such as paddling was done. In most states school paddling is outlawed. These days it seems as if the number of bullying incidents have increased. There are so many reasons why people become and are bullies. Some of the reasons are from lack of discipline from the parent/parents as a child, to the fact that this particular person is a “bad seed”, period.
There are logical and illogical was to punish the bully. Because bullying seems to have gotten out of control, in the future this issue may be left totally left up to law enforcement: A perfect punishment to fit the crime.