Skylanders Costumes for Kids and Adults

Kids all across the nation can only hope that there will be a number of sensational Skylanders costumes released for Halloween this season.

In 2013, Skylanders costumes were HOT. Distributors every where had a
really difficult time keeping any of them in stock for much more than a
couple of days.

This truly should not be much of a surprise seeing as how popular Spyro’s Adventure was at the time.

If, however, the first Skylanders game was popular, Skylanders Giants
makes that popularity seem like child’s play. As the season progresses,
we will keep you up to date with any new Skylanders Giants Halloween
costumes news that we hear about and will let you know as soon as ANY
come available for sale.

Spyro as sold on BuyCostumes

It really should come as no surprise that the first Skylanders Giants costume to be released this season is this sensational Crusher costume!

When Giants first appeared on the shelves, Target scored an exclusive chase figure; known as the Granite Crusher.

It looks as if this character’s popularity continues to pull in fans all across the globe.

This officially licensed Skylanders Giants costume comes complete with a sweet looking granite and green colored jumpsuit. While the molded shin guards are certainly nice, it is the Crusher character mask that really makes this outfit stand out.

Huge eyes are set against granite colored mask that is accented with two sharp pearly white teeth. This is one costume that has it all!

If your kids are anything like mine then this is the one costume you do not want to miss out on this season.

Jet Vac is one of the more popular characters. He was, in fact, one of
the first Lightcore figures released and continues to play a prominent
role in many kid’s daily game play!

Incredibly realistic molded shoe and hand
covers really help up the ante when it comes to the overall coolness
factor.

Of course, the deluxe Jet Vac character mask once again steals the show. This thing is pure awesomeness.

When it comes to locating these sensational Skylanders Halloween costumes, your kids will thank you if you are able to find a Tree Rex costume, Chop Chop costume, or even this gorgeous Gill Grunt costume! 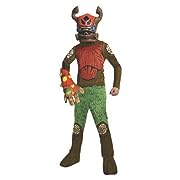 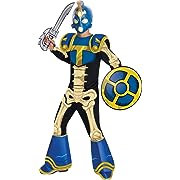 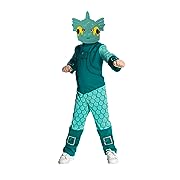