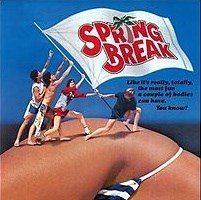 Spring break as it is often called now is a week long period of time when kids of all ages get time away from school.  It used to be called Easter vacation, but people got their feathers all riled over that, so it’s now called spring break.  But that’s not the discussion here.  Rather some of the things that can happen during spring break.

Even those events can’t be listed in entirety here, because there’s simply way to many of them.  But a handful of them will be and the inevitable consequences of those.  Some are from personal friends, while others are from things that others have done.

This Sirgo is intended to provoke thought, because after the fact, well, it’s simply to late.  So for your consideration: Spring Break 2015.

Why embarrassing videos?
So that you learn from it and don’t regret what you did later, when it’s to late and you can’t take it back.

Spring break is meant to be a time of fun for everyone.  That’s why you get a week (or two) off.  So that you can relax, unwind and get-away for awhile.  Getting away, taking a vacation is a wonderful thing to do.  But what happens when you take that spring break in the wrong direction?  Disaster is waiting around the corner.

Most often spring break for college students means going do to the beach is small bikini’s and drinking lots of beer.  You may be loving that, but consider the following things.  To much sun can mean dehydration, sun stroke, heat stroke, and a 3rd degree burn.  I know you want to have fun, but make sure that you drink lots of water if you’re going to have lots of beer.

It doesn’t stop there either.  If you are thinking about drinking, make sure that you have a designated driver.  It’s all to common that those kids that are drinking and driving, have a car accident where others are killed.  If you doubt this, follow this link.

Again, I know you want to have fun, but be responsible with that fun.  The kid mentioned above lost a year of his life and the man he hit, lost all of his.  It’s not worth it for anyone.

I know, you’re sure nothing is going to happen to you.  What I’ve written always happens to the other guys.  But just in case this one time you’re the other guy.  For those less serious events, make sure that you know where your local urgent care is.  In most cases, urgent cares are able to see you within 20 minutes and they can save you tons of money over the emergency room.

If you need to be taken by ambulance, well then you’re not in a very good situation at all.  It means that you need immediate care, and hopefully it’s not because of that DUI that was talked about earlier.

I know it’s hard to believe, but you can have a wonderful and fun spring break without getting a sunburn, drunk or any of those other disasters that tend to occur during spring break.

Spring Break + Stupidity +
drinking, can cause you to take a ride in an ambulance. But if you’re really lucky, you could end up in an urgent care.