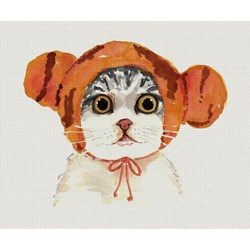 I know Christmas is approaching quickly.  It’s a little over 2 weeks away and you’ve bought all of those big gifts.  You know the ones I’m talking about.  The ones that everyone’s been making sure that you know that they wanted that something special and exactly what it was for the last few months.  It’s not only done, but in hiding.  So what’s left?  After all the gifts are already done, we’ve established that. So what does that leave for you to get done?

Very often it’s the small things that we shoppers forget to do, because we’re focused on getting those big things.  Not only are ornaments something that’s common place to buy yearly now (you know the ones with the dates on them), but so are stocking stuffers.  Yes, it’s fun to put  chocolate and other candy in them, but what about the small things that are actual gifts and toys.  Needlepoint is a good example.

5 X 5 Needlepoints
are something that’s small enough to fit in a stocking, yet full of fun for the adventures of the days to come.

Needlepoint is one of those activities that often are viewed in one of two extremes.  First it’s too easy or second it’s to hard.  While the argument can be made that needlepoint is easy, it’s not to easy.  It something that can be taught and done rather quickly if one chooses.

There are multiple stitches that can be learned over time, but for the most part, you can hit the ground running with the single basic stick that almost all needlepoint’s are based on.  Remember we’re talking about stocking stuffers not rocket sciences.  They’re just that little extra something for those stockings.

Also remember that needlepoint has a great deal of variety for what you can do in pictures.  You can get everything from Edgar Allan Poe to Van Gogh.  If that’s not your taste, there’s animals, ships and famous people.  The sky’s truly the limit now in needlepoint.

Needlepoint kits are wonderful
options for stocking stuffers for children of most all ages.

While needlepoint isn’t something just for girls it’s often thought of.  Which is why I’m now giving time for a common boys toy that can be easy supplied in a stocking for that Christmas morning rush.  The toy Hot Wheels.  I, while not being male, loved Hot Wheels while I was growing up.  I’ve sent let them fall by the wayside for the real thing.

However, if you’re not a grown up (and even if you are), you may find that stocking stuffier in the world of fast small cars!  The are cute and tiny and give boys the thrill that they all look for on that morning that is more exciting then most.  You can fit one or a dozen in a stocking, all depending on the size of the stocking and if you chose to take them out of their wrapping.

While Hot Wheels may not be as technology advanced, they are something that will give boys of any age hours and hours of endless fun.

Hot Wheels...
are hot fun for the mind and body!