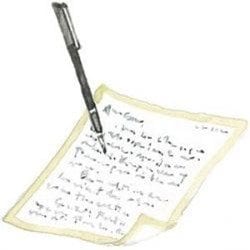 This is a short story beautifully written by a famous Indian writer Gaurishanker Goverdharam Joshi(Dhumektu).The Letter is about a story an old man who spent the rest of his life for his daughter’s letter. It shows the importance of communication and love. One must not judge a person without thinking what that person is going through.This is a story of long lasting love .. beyond the grave.

A Story of Communication

An old man named Coachman Ali kept on waiting in the post office for a letter. The workers in the office become annoyed because he had being staying there for the last five years still he does not receive a letter.Coachman Ali used to be a good hunter who retired after his daughter Marian left him after marrying a soldier and lived in another town.One day, the postmaster inquired that if Ali is insane and the staffs started talking about insane people.Several days after that, Ali didn’t show up until he came to the office in a weak appearance. He wanted to talk to the postmaster but because he was in hurry to leave, he ignored him, Lakshmi Das was entertained him instead. Coachman Ali gave him five Guineas and asked him a favor that the letter must be forwarded to his grave.After that, the old man did not show up anymore. One day, the postmaster’s daughter, who lived in another town, was ill. Upon looking for his letter in the incoming letters in post office, he found a letter addressed to Coachman Ali. There, he realized Ali’s situation as a father.Like Ali, the postmaster kept on waiting for his letter. He heard someone knocking and he found Ali and gave him the letter. Then Coachman Ali suddenly disappeared. Lakshmi Das came and told the postmaster that Coachman Ali died three months ago. The postmaster now realized that every letter sent contained warm beats not just a piece of paper. They placed the letter on Ali’s grave.The postmaster waited while regretting what he had done to Coachman Ali.