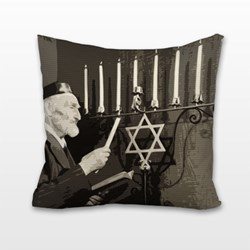 There are so many holidays out there that it’s nearly impossible to keep up with all of them.  There’s everything from the celebration of a country’s independence to celebrating being a grandparent.  There’s so many holidays that often times the more important ones go unnoticed.  They slide between the cracks and not attention is given to them whatsoever.

It’s understandable, if you do a search for holidays in a given month most every day has something that it’s been set aside for.  Just so that ‘event’ will receive recognition.  Some are silly and should never have been given a holiday, while others are special and most assuredly deserve a holiday.  Such is the case with Hanukkah.

Before you go off the depend and decide not to read any more.  Please understand what this Sirgo isn’t.  It’s not a place where it’s a push for this particular holiday.  It’s also not a push for a particular faith or a particular believe system.  It’s simply an article about some of the very basic things that are important to those that treasure this given day and what that day is all about.

Like most holidays, Hanukkah has a lot of deep study that can be done on it.  That also isn’t my intent, but rather to give some very basic information about it.  So, lets get started.

<span style="font-family: Verdana; font-size: 18px;">The <a rel="NoFollow" href="http://www.chabad.org/holidays/chanukah/article_cdo/aid/102911/jewish/What-is-Hanukkah.htm">festival of lights</a> is a 8 day period where <a rel="NoFollow" href="http://chelseaneedlepoint.com/collections/judaica" tabindex="0">light triumphs</a> over darkness. &nbsp;It begins on the the 25th day of the month of Kislev.<br /><br />The purpose of the festival is to celebrate something quit significant in the history of the&nbsp;Israelite's. &nbsp;Some 21 century's ago, in the history of the&nbsp;Israelites, the&nbsp;</span><span style="font-family: Verdana; font-size: 18px; color: #000000;"><span style="line-height: 25.2000007629395px;">Syria-Greeks tried to eliminate them in battle. &nbsp;As you've probably surmised the&nbsp;Israelites&nbsp;bet&nbsp;the <a rel="NoFollow" href="http://www.chabad.org/holidays/chanukah/article_cdo/aid/2683/jewish/The-Mudswamps-of-Hella.htm" tabindex="0">Syria-Greeks</a> in battle. &nbsp;Which rocked the world at that particular time. &nbsp;It was another case of David and&nbsp;Goliath.&nbsp;</span><br /><br /><span style="line-height: 25.2000007629395px;">This is where it get's really interesting. &nbsp;You see, when the&nbsp;Israelites&nbsp;went&nbsp;and reclaimed their land and more importantly the Holy Temple, there was only enough oil in the&nbsp;menorah to have it remain lite for one day. &nbsp;The miracle: it remained lite for 8 days. &nbsp;Until the new oil could be prepared and then used.&nbsp;</span><br /><br /><span style="line-height: 25.2000007629395px;">It is because of this miracle that Hanukkah was named and in turn because a time of celebration for the&nbsp;Israelites. &nbsp;</span></span>

Hanukkah is a special
time of year, when the Jewish people celebrate a major miracle they received.

Hanukkah also spelled Chanukkah has many customs that have developed as part of the celebrations.  It’s one of the reasons that many consider it to be much like Christmas.  If you as people of either faith, these two holidays aren’t even close to each other.

With that being said, there is much celebration that comes from this miracle.  They have special foods called latkes and sufganiot.  They play with dreidels (also called a spinning top).  They also give gifts and money, especially to their children.  It is truly a holiday season of celebration games and remembrance of the victory of those of days gone by.

Hanukkah...
is 8 days of celebration in remembrance of those that should have been annihilated, by the once greater power.