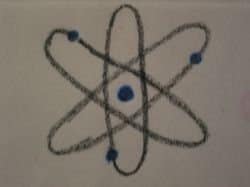 Dress Like Your Favorite Big Bang Theory Character for Halloween

Introductory picture is the Big Bang Theory atom, as drawn by me.

Sheldon Cooper
“I’m not crazy. My mother had me tested.”

Sheldon Cooper is theoretical physicist. He’s very persnickety and tends to annoy everyone because he has to have everything his way. He received his first Ph.D. when he was sixteen and he has no problem letting everyone know that he’s smarter than they are.

Sheldon’s way of dressing is easy to replicate. He usually wears a T-shirt over a long sleeved shirt with slacks. He likes superheroes, so he enjoys wearing superhero T-shirts. There are also some other shirts that were worn by Sheldon available on Amazon.

Leonard Hofstadter
“Sometimes your movements are so lifelike I forget you’re not a real boy!”

Leonard usually wears a light jacket over a hoodie and a T-shirt with
slacks. He seems to be partial to T-shirts that depict molecules. Included in my Amazon recommendations is a shirt with the caffeine molecule on it. And don’t forget his black-rimmed glasses. Does anyone else wonder why the guys wear so many layers in California?

Howard Wolowitz is an engineer and the only one of the guys without a doctorate, although it can be argued that he is the most successful because he had the opportunity to go into space.

Howard lives with his mother and he dresses like his mother picked his clothes out for him. He has a very seventies style of dressing. He wears bright, pastel-colored clothes, plaid shirts over a turtleneck, and large belt buckles.

Rajesh Koothrappali
“I wonder what the non-pathetic people are doing tonight.”

Rajesh Koothrappali is an astrophysicist. He is extremely shy around women, to the extent that he can’t talk to women unless he has been drinking.

Raj likes to wear sweater vests over white button-up collared shirts and a hoodie or light jacket. Again with the layers in California. Tan or olive slacks will complete the costume.

Penny
“Holy crap on a cracker.”

Penny is an aspiring actress who waitresses at the Cheesecake Factory. While she is not as well-educated as the rest she has street smarts and has helped the guys navigate the “real world.”

Penny doesn’t have a particularly distinctive way of dressing. She is partial to jeans or cutoffs and a tank top. She seems to prefer flower print tops. However, Penny has worn many different style outfits over the years from which you can draw inspiration.

The Big Bang Theory Fashion, Outfits, Clothing and Wardrobe on CBS
Worn on TV. This site tracks down clothes that are seen in shows so you know the exact item to buy to dress like your favorite television character.

Costumes Featured in Big Bang Theory
This is my article featuring costumes that the characters of this show have worn.

If you know someone who is a fan of The Big Bang Theory and are trying to think of a unique gift for them then consider one of these fun items I tracked down on Amazon. These are the Rock, Paper, Scissors, Lizard, Spock Dice Game; the RPSLS T-shirt; a talking Bazinga button; Big Bang Theory Monopoly; and Big Bang Theory Ultimate Genius Party Game, fun for ages eight to eighty.