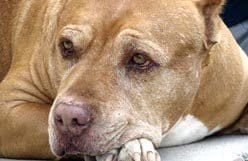 If any of you have ever seen “The Dog Whisper” you will recognize the posted image of “Daddy”, Cesar Millan’s beloved pit bull. Daddy passed away a little over a year ago but before that? Daddy was an integral part of the training and rehabilitation that Cesar does so well. And before his death, Daddy picked out and helped train “Junior”, another pit bull and part of Cesar’s “pack”.
In 2005 in Ontario, the McGuinty government introduced “the Pit Bull Ban”, a Dog Specific Legislation (DSL). This “law” required the muzzling of all pit bulls-and any dog that even remotely looked like a bully! No pit bull was allowed entrance into Ontario if it wasn’t living there already and many, many MANY puppies that were bullys or “had the physical characteristics similar to a pit bull” were euthanized-and not always humanely. All of this was in response to an attack on a human by a single pit bull. This law and all its precautions was put into effect to reduce the dog bites in Ontario.
Guess what? Since the ban came into effect, dog bites in Ontario have INCREASED. Of course, the pit bull bites have reduced, after all bullys are no longer allowed in public without a muzzle-but what about all the other breeds? Should all dogs require muzzles to leave the house now? How about that Husky who attacked and killed the baby a few months ago? Does that mean they should be banned now too?
Personally, I have never owned a pit bull, nor have I ever been attacked by one. I have, however been attacked on 3 separate occasions by off-leash German Shepards (the first, when I was a young child, was when I was playing on my own front lawn with our 13 year old Yorkshire Terrier. When our little Yorkie tried to defend me the Sheppard stomped her and turned on me. My mother beat it off with a broom when my screams of fear brought her out of the house.). Yes, these attacks have caused me to be leery of this particular breed-especially after witnessing police dogs of the same breed attack and maim criminals- but never have I thought the creed should be banned. After all, I’ve also been attacked and “herded” by several small dogs.
I own a mutt. A Jack Russell/lab mix. Yes, he carries some traits characteristic of both his known breeds. But, considering that the Jack Russell was originally bred to ground and corner foxes, my dog is surprisingly well behaved with animals of “prey”-even when they run past him to disappear underground in their dens. Granted, at 52 lbs he certainly couldn’t fit in a rabbit hole, he is checked from attempts by a very important factor-his TRAINING!
Any dog can bite. Any dog can maim. And almost any dog can kill. Yes, large breed dogs are more dangerous during an attack- in the same way that an adult is more dangerous in a mugging than a child. Proper training and exercise prevent aggressive dogs. A breed no more makes a dog aggressive than a nationality defines a person’s character. It can influence it, yes, but not define it.
Many people are upset with the amount of attention paid to this issue, especially now that the talk is turning seriously to overturning the ban. There are people saying “what does it matter? We have hundreds of species going extinct every week/month/year so why does one dog breed matter?” My point is what right do we, does anyone, have to FORCE a breed into extinction because of how they look and how they are perceived? Should tall, broad men be banned because they make women nervous when we pass them in the street? How about people with tattoos? Large muscles? Where will the line be drawn?
What right does anyone, especially uneducated politicians with no ACTUAL facts or experience, have to determine the rights of the dog owners and the dogs themselves?