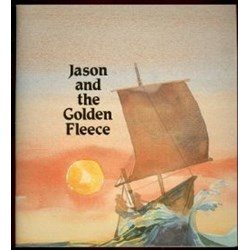 This is a summary of the adventures and exploits of Jason the Argonaut who was based on the Greek Mythology.Synopsis:The tale of the Golden Fleece begins with a Greek king named Athamas, who got tired of his wife, put her away and married another, the Princess Ino. The people, threatened with starvation, force the king to yield and permit the Phrixus’ death. When the two children crossing the strait that separates Europe and Asia, the girl, whose named was Helle, slipped and fell into the water she was drowned. The king’s young son, Jason, the rightful heir to the kingdom, had been sent away secretly to a place of safety. Pelias had been told by an oracle that he would die at the hands of kingsmen and he would beware of anyone with only one sandal. Jason arrived with one foot bare. Pelias was afraid yet he hid his terror. All the brave men in Greece joyfully met the challenge. Many perilous adventures had come with the heroes. Medea peeped and heard what the king had said. She immediately fell in love in Jason. Medea sat alone weeping for she wanted to yield to the mad passion and go against her father. With her magic ointment she helped Jason. When Jason was in the field, he was possessed by irresistible power until the contest ended in victory. Jason and Medea took the Golden Fleece to Pelias. Two sons were born to them. But the great love for Jason made the loss for her family and her country. He engaged himself to marry the daughter of the king of Corinth. Upon hearing this sad news, Medea tormented with the wrongs she did to his father, was determined to kill Jason and his bride. She turned to her children and killed them before she was carried away by her chariot.