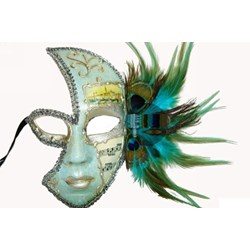 Mystery and Intrigue with Venetian Masks

Mystery and intrigue are guaranteed with a Venetian Carnival Mask! Whether it’s a Masked Ball, a street Carnival, or simply a costume party – everybody will be guessing who is behind each mask – and who are they with? Choose carefully who you are to be – masks have hidden meanings!

Venetian Masks – Why Are They Worn?

Venetian Masks may have been around since the13th century.  It is thought that they were first used in celebrations following victory in Italian political and military battles. A Masked Ball was the perfect opportunity for secret
assignations and political intrigue; the use of masks spread to everyday life, enabling  officials to interrogate without conceding
identity, or to divulge military and political intelligence anonymously. Carnival evolved from pre-Lent festivities – the word probably originates from ‘carne levare’ – to leave meat. Masks became an important part of the Commedia Dell’arte, the popular plays performed by traveling troupes. These plays featured masked characters, and were based on the themes of love, jealousy and infidelity.

Venetian Masks evolved for varying purposes – such as the elongated nose of the Plague Doctor, and according to usage – some being strictly male, others strictly female – or from characters in the popular Commedia Dell’Arte. Masks became such a part of Venetian society that Mask makers, or mascherari, even formed a guild to protect the interests of the mask-making industry.
Here are some of the well-known Venetian Masks.

La Bauta is the traditional Venetian Mask. It is possible to eat and drink without removing it. La Bauta is white, and consisted of the mask covering the face, fine woven lace, and the black tricorno hat.

La Moretta was a round, black velvet mask, usually worn with a veil by women when visiting convents. It was kept in place by a button which was held by the front teeth. Naturally, this meant the wearer was unable to talk!

The simplest mask – full face. Originally white, worn by men and with a hat and cloak. Now worn by both sexes and may be lavishly decorated.

Superstition has always associated cats with the supernatural: witchcraft and devilry; cats were killed in the mistaken belief that they associated with the Devil who was responsible for the plague. Cats became so rare in Venice they were the subject of a mask.

Jesters date back to the Middle Ages. Jesters’ hats are unmistakeable; floppy, pointed, each point having a round bell at the end.

14th century plagues struck fear into the populace. Finding a Doctor who would attend the sick was not easy; there was no cure and many Doctors would keep away from a potential victim. The few who would wore an elaborate costume to try to ward off the disease. Plague Doctors wore a hat, a mask with crystal eyes which protected the wearer’s eyes and had a beak stuffed full of spices or herbs to breathe through in hopes of avoiding the intake of bad air, a wooden stick or cane with which to keep people away, a pair of leather gloves, a long waxed coat and full length boots.

The Commedia Dell’Arte was a travelling theatre company of the 16th and 17th centuries featuring characters who reflected the best and worst of people. Not all wore masks. The Zanni were mostly servants, fulfilling their basic needs. Females played to the audience, especially men. Arlecchino or Harlequin, the cleverest of the Zanni, was a satirist or mimic, living on his wits, creating problems and extricating himself by his own devices, sought by Columbina but inattentive to her. Columbina (“little dove”) was a comic servant character, dressed in rags. She carried a tambourine against the amorous attention of Pantalone. Pantalone is a miser, an elderly, stupid shopkeeper; lecherous, greedy and glutinous. He wears oversized clothes and a short pointed mask. He is desperate to impose his authority on others. Scaramouche dressed in black, with a long pointed mask, cape, feathered hat and long boots. He wore a sword in his belt. He is boastful and cowardly, playing one character off against another. Pierrot is naive, cheated but still trusting. He wears white clothes and black accessories. His hat is tall and pointed. He has a whitened face, with a teardrop. Pulcinella the hunchback spends his time chasing after women. In England he is Punch of Punch and Judy fame. Pulcinella has a long nose, rather like a beak. He may have long hair, wear a black mask and long white coat.