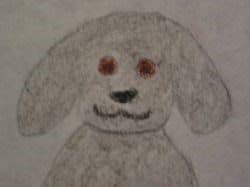 Wilfred is an odd show about a man (Ryan) who talks to his neighbor’s dog (Wilfred). He doesn’t just talk to the dog, he sees the dog as a man in a dog suit and has actual give-and-take conversations with the “dog.” Whether Ryan is crazy or there is a rational explanation for Wilfred remains to be seen. If you’re a fan of the surreal show Wilfred then you might consider wearing a Wilfred costume for Halloween. If you want to go with someone for Halloween, then one person can dress as Wilfred and one as Ryan.
Introductory picture is a drawing of mine.

Wilfred
“If you think I’m just going to stand by and watch you… Bubbles! One, two, three…”

Wilfred is a dog and the star of the show. He is played by Jason Gann. Ryan (and the audience) sees him as a man in a dog suit but everyone else sees him as just a dog. FX came out with an official Wilfred dog suit and Wilfred accessories (which include black face paint for the nose), so dressing like Wilfred is easy.

Ryan is played by Elijah Wood. He doesn’t have a particularly distinctive way of dressing. He appears partial to jeans and a tight shirt with a hoodie. Below are my Amazon recommendations based on some of the more memorable clothes the character has worn.

If you want to be really funny, one person can go as Wilfred and the other can go as Frodo Baggins (Elijah Wood’s character from Lord of the Rings).

Elijah Wood has brilliant blue eyes, so when his character wore a light blue button-up shirt and tie and black slacks, it was memorable. And of course Ryan loves his hoodies. The hoodie linked to here comes in many different colors.

Clothes Worn on Wilfred
Shop Your TV tracks down the clothes that are seen on popular television shows. This is their Wilfred page, with clothes worn not only by Ryan but other characters, too.

Wilfred
“It happened once before. I was at a party. And this guy looked right at me and said: ‘Hey! What’s up, dog? I see you. And I know what you’re up to.’ And I said, ‘well, I see you too. If you got something to say, say it.’ Turns out he was talking to the guy right behind me, who had been banging his wife. Ryan, please tell me there’s not been a guy standing right behind me ever since we’ve met?”

One of the mysteries of the show is the nature of Wilfred. What Wilfred
is exactly and why Ryan sees him as a man in a dog suit is the source of
much speculation. My theory is that Wilfred is really a man in a dog suit and it’s an
elaborate prank that Ryan’s neighbor and sister are in on. The rest of
the neighborhood just thinks there’s a quirky man who wears a dog suit
that lives in town. That would explain why no one thinks it’s weird when
Ryan walks Wilfred down the street talking to him as though he were a
man and not just a dog, asking him for advice and all that.

Catch Up On Episodes of Wilfred