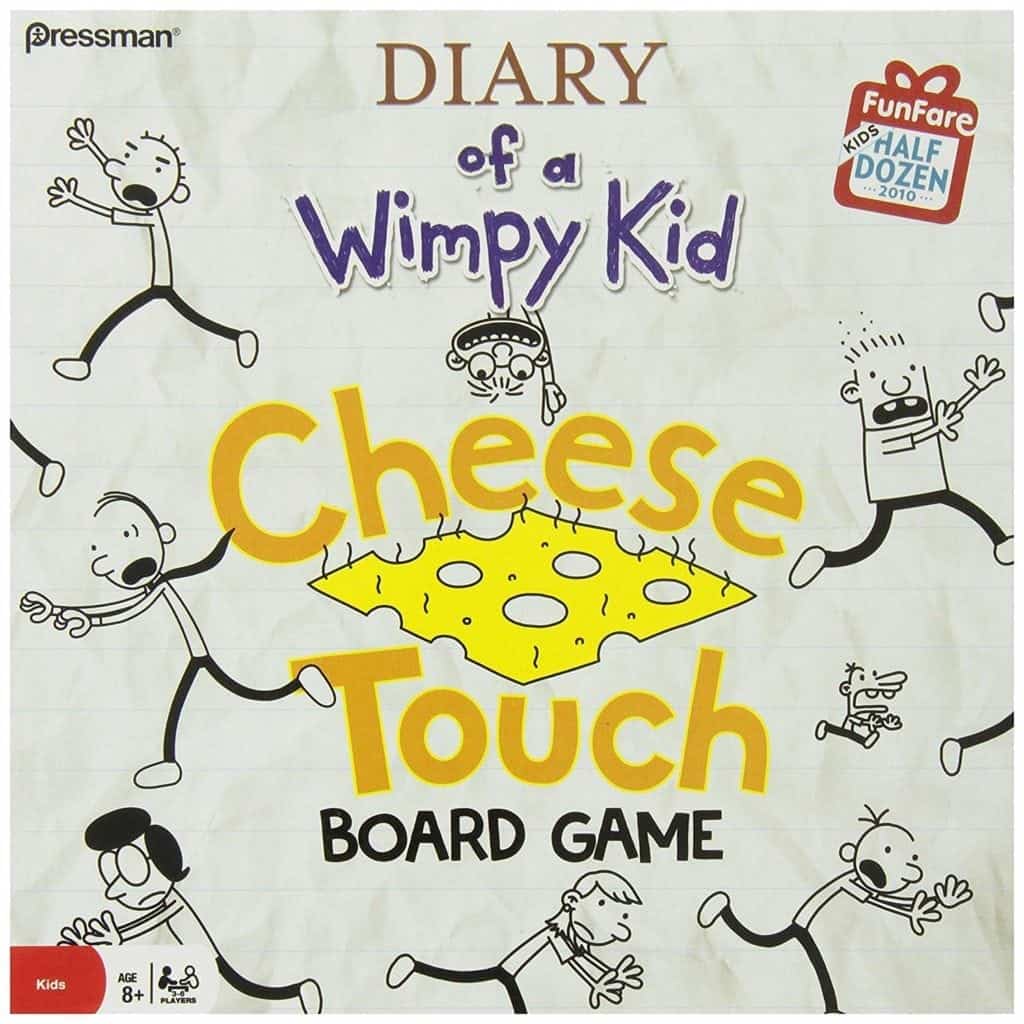 Wimpy Kid Cheese Touch Games is a board game that is based on the popular book series named as the Diary of a Wimpy-Kid. This game will have your kids laughing until the finish line. In fact, the kids love this board game the same way they love the books written on the subject matter.

Your kid is able to choose from one of the six characters of the Wimpy Kid Universe (Fregley, Greg, Holly Hills, Manny, Rowley or Rodrick), and make their way around the game board. If you want to win the game, you will have to avoid the cheese touch, which is a challenge that can even stop the most skilled player in his or her tracks. The books are filled with crazy characters, stories and situations that your kids can relate to. Wimpy Kid Cheese Touch Games take the characters to create a game of crazy questions/answers and things to do. This article provides a comprehensive review of the Wimpy Kid Cheese Game.

The objective of the game is to be the first to go to the end of the track on the board. The challenge is to not have the “cheese touch” while doing so. You have to move around the board by scoring points performing various activities and answering questions from the cards correctly. There are five cards/spaces that come with the board game. The 5-cards/spaces are:

3. Yes Or No: The player will read the question on the card, and all other players will write down their answers. The player will then guess what each person wrote down. The answer is a Yes-No answer. If they get the answers correct, they move forward. If they miss even one answer, they don’t move, but get the cheese.

4. Great Minds Think Alike: The player will secretly read the card and choose someone they think will answer like them. Once the player picks the person, he/she will read the question aloud. Now, both of them will write down their answers. If the answers match, both of them move ahead 3-spaces.

5. Randomness: The player needs to read the card and do what it says.

If all above situations, if the player doesn’t score a space, he/she will get the Cheese Touch. The whole family can enjoy the game if they are ready to answer silly questions. The kids get quite a thrill out of the questions and situations on the cards. The toughest cards to deal are the “Do It Like This” cards. These are the cards where the player has to guess the way others are acting. This is where most kids get frustrated and take multiple turns on the same spot. Even though a kid may get frustrated once in a while, they still love the game.

The board game is suitable for 3-6 players who are aged 8-years and up. The game Box Contains: The Game board, Card box, 180 Game cards, 6 movers, Cheese touch piece, Game die and Rules. All in all, it is one of the funniest games that will thrill your kids.

Check it out on Amazon