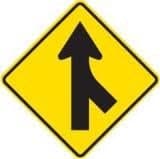 Get Your Butt Over!

And this sign means what? Traffic is merging together, so if you are on the inside lane ( right lane ), and the traffic is merging in from your immediate right, it means for you to either move into the lane to your left, or be prepared for another vehicle to merge into the exact same lane that you are currently in by either speeding up to get past the incoming vehicle, or slow down, to allow the vehicle to merge smoothly and safely. In other words, get your butt over, if you can do so safely. The car to your right has nowhere to go but into the lane that you are already in. But, you will have cars driving in the right lane, see the sign ( that the vehicle to his right can also see ), and continue driving as if they own that lane, and there is no vehicle coming in from their right. People! There will be an accident if you continue to drive like that! The other day, I was the vehicle merging, and there was a car to my left, and, there wasn’t any traffic on his left. But, he continued coming, and we pretty much met, with me getting to the merged point before him. He reluctantly moved enough to his left to not hit me ( but he didn’t get all the way over into the left lane ), then he laid on his horn. ‘Fool! Get your butt over’, is all that I thought, and ‘go ahead and hit me’ was the other thought. When he laid on his horn, I did the same. As we traveled along, he eventually moved his vehicle into the lane to his left ( which is what he should have done in the beginning ). I just shook my head. I turned right at the upcoming corner, and he continued through the intersection, made a right as well, and went into the local McDonalds. I guess he was in a hurry to get a Big Mac and fries. He could have been eating metal instead. Some people just think that they own the road. Not! Get your butt over! That’s just my thoughts. What’s yours?

And While You’re Out On The Road…