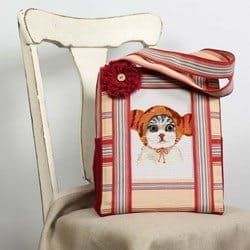 For The Love Of The Craft ~ Needlepoint

Those that love to create things, often love to because they are using their hands.  They are also people that usually do more then one craft.  Those crafts can range from painting, sewing, knitting and needlepoint.

Needlepoint is the focus of this Sirgo as well as a couple of items that you have the ability to create and then actually use them.  No, I’m not talking about something that you put on your wall, or even something that you can use on your couch.  Both of those types of items are extremely common place, at least as far as crafts are concerned.

So what am I talking about then?  A belt that you can handcraft and a purse or bag if you will that you can carry out the front door.  So more examples and information about them.

Needlepoint...
Is more than just a picture on a wall or a pillow on a couch.

While you probably know what I mean by functional, I will explain anyway.  A belt can actually have a function.  Much like overalls, a belt is often used top hold trousers and pants up.  That way everyone doesn’t see everything that you’ve got, or at least most everything that you have.

Belts therefore can be a type of self expression.  What’s left to question then is what types of belts can be self expression.  Most of the time we consider the belt buckle to be the element of self expression.  But now there is another way.  If you have a child that needs to have help with keeping their pants up, you have the option of getting or more accurately creating a belt that has character for them.

That’s where needlepoint belts are at in today’s realm.  You can handcraft that belt for your loved one.  And has the picture shows, they are appropriate for children.  But they are also for adults.  Consider gulf clubs, birds, fern and rabbits are just some of the options that you have for creating needlepoint belts.

To Some It’s A Purse, To Others A Bag

Like belts, bags or purses if you will, are very personal items.  They’re something that is used as expression of who you are.  Consider the little girl that loves to play dress up.  She wears her mothers makeup, hat, dress, high heels and carries her purse.  While the little girl may not understand what’s she’s doing, her play is significant.

It’s putting into her mind what she’s going to do and be like when she’s older.  So that purse that seems to have little importance to her when she’s little, will have great importance when she’s a full grown woman.  So how to express yourself outside of designer purses becomes the questions.

Consider that these purses are something that you can create and then use in any number of ways.  The selection part is easy.  You find the picture that best expresses you, and then you create it.  Maybe it’s your dog.  Maybe it’s your cat, or  maybe you’re a gardener.  Whatever it it, buy it and then create it and you’ll take your self-expression to an entirely new level.