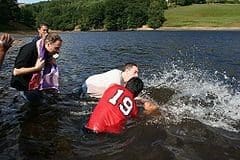 You might be thinking that this is going to be a discussion on baptism.  That everyone needs it and that it’s a ritual and nothing more.  Well that’s not the case.  In fact most people should not be baptised.  Can you believe that someone actually said that?  After all there’s so much controversy about baby baptism versus adult baptism.  And when you listen to people talk especially those of faith, you might be tempted to believe that everyone is supposed to be baptised, and you’d be wrong.

Baptism is supposed to be an outward representation of a change that has occured inside.  This change is having received Christ and made him Lord of your life.  If you haven’t don’t that, then you shouldn’t be baptised.  It’s that plain…it’s that simple.

If you have received Christ.  If you’ve repented, then you should in turn be baptised.  This is in obedience with the scriptures (Acts 2:38), where it clearly says that we are to repent and then to be baptised.

Baptism
is an outward sign of an inward change.

The robe!  This is another area that I’m not going to argue one way or another on it, but rather explain the reasoning behind the, which I do agree with.  Robes are something that many church believe and it is understandable that you need to have a robe in order to be baptized.  Need may be to strong of a word, but consider this: when you’re being baptized and you use a robe, you don’t need to worry about what you’re wearing, if it will hold up during your baptism or if something will fall of or show that shouldn’t.

A baptism robe will take care of all those issues.  You are fully covered from shoulders to ankles.  If you buy your own (I would), then you get to keep it as a memory of this major event in your life.  And make to mistake, if you have received Christ and are being baptized, it is a major event.  So why wouldn’t you want to have your own robe to remember the event by.  That only makes sense.

The next question you may be asking is, “where do I get one?” or “where can our church order these?” The answer to that is simple.  Like everything else, there are companies that make them.  Usually the name of the company is clear about what they specialize in.  For example: Baptismal Robes.  That’s pretty clear and pretty specific.  You would never question what they sell if you’re looking for baptismal robes.  Most will allow you to order both individual and group robes.  As well as childrens and adults.  Baptismal robes are one of those things that isn’t a one-size fits all.

The next step is with you.  If you’re ready to be baptised, then consider that getting a baptismal robe might just be worth the small investment and the memory that will come with having one.

Baptismal robes
aren’t manditory, but they do eleminate a lot of problems.