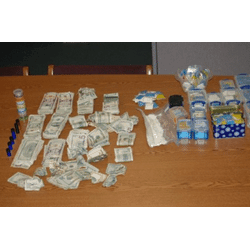 Bath salts is a DRUG and I’m NOT talking about the scented bath salts that you buy in the store, and use in the bath!

It is a synthetic drug that is thought to induce euphoria, excitement, and occasionally psychotic break outs. Bath salt drugs are basically synthetic substances, made out of legal chemicals, that mimic the effects of illegal drugs. It can be inhaled, swallowed or injected. The effects of this drug are not fully understood, but research shows it is highly addictive.

On bath salts you have a very high risk of overdose and death. When taken, it induces rapid heartbeat, high blood pressure, chest pains, and convulsions.
I don’t understand why people would want to do this sort of drug, or why people are still doing this drug knowing all these things!

Dr. Sullivan Smith, who works at the Cookeville Regional Medical Center in Tennessee said,
“We’re seeing extreme agitation, hallucinations that are very vivid, paranoia and some really violent behavior, so it’s a real crisis for us,” Smith said. “We sedate the living daylights out of them. And we’re talking doses on the order of 10 or 20 times what you would give for a painful procedure.”

This was first incident that I heard about that got my attention, and I think most of the rest of the worlds attention right away!
Rudy Eugene attacked a homeless man named Ronald Poppo, it was believed that he was on bath salts at the time of doing so and that is why he was able to do have the strength to hold a man down, and actually eat his face.He also refused to stop eating the mans face, and was shot by police officers multiple times before he actually died. There was no other seemingly way to stop him from attacking that man, and possibly others.

Rudy’s girlfriend Yovonka Bryant went to a news conference on Wednesday, June 6th, 2012 in Miami.The last time she had seen Rudy was the day before the attack. “He would never leave without it, his Bible, and his Quran was always by his side,” Bryant said.
She also explained she had been with him for 4 months, they watched religious shows every morning and Rudy had never shown any signs on violence during their relationship, at all. She also said she thought someone may have laced is marijuana with it.
She said she had never seen him drink, and only saw him smoke marijuana once at a party. His brother said he didn’t drink much, he didn’t do any hard drugs, and he only smoked marijuana.
She explained all this because she wanted to let people know how Rudy Eugene really was, she wanted people to understand that he wasn’t some crazed drug addict and he didn’t even do drugs! I understand that, I hope other people can as well. It must of been hard for her, and she had a lot of strength coming out and doing that.
If you ever read this, I am so sorry for your loss and I know if you were strong enough to do that, your strong enough to make it through.
I believe Rudy Eugene was a good person, and people should be aware of this!
It is also said through research that toxology reports state the only thing in his system was marijuana. Not synthetic marijuana, just plain marijuana. Now! There are many debates on that as well, it has been stated by multiple people that this is probably not the case. It is difficult, and impossible for labs to test for every drug out there.
Dr. Barry Logan, one of the nation’s leading toxicologists said, “Clandestine labs are using more than 100 chemical compounds to make synthetic marijuana, but even the most sophisticated lab can only test for 17, and there are hundreds of bath salt compounds out there, but toxicologists can only test for 40”.

Freddy Sharp, is told to have been a drug user since around the age of 13. He had an overdose while on bath salts, so he knows first hand! what it is like to be in bath salts.
From the sounds of it, it is horrble. Absolutely horrible sounding , and I couldn’t imagine anything like it. I seriously hope this page gets the message across to some people!
Freddy Sharp sent a message out to users of bath salts:

Trying to stop this problem from spreading any further the DEA issued a temporary ban in October, on three of the most common drugs that seem to be used in these bath salt drugs: Mephedropne, Methylone, and MDPV. That ban became permanent under the bill signed by Obama on July 10th 2012.Now anyone caught selling, making or possessing 28 synthetic drugs, including bath salts, will have to face nearly the same consequences as if they were caught with cocaine or heroine. (six months in jail, and a $1,000 fine)

Stephanie Mitchell
Assistant manager of The Den, a tobacco and paraphernalia shop in Morgantown, said their store hasn’t sold bath salts during the time she’s worked there, which is six months. But she has strung out customers come in asking for them still.

The more you know, the better you can avoid it!

Some other names that bath salts may be called are:
1.Ivory wave
2.Blizzard
3.Stardust
4.Lady bubbles(found on someone)
5.Vanilla Sky
6.Bliss

U.S. laws state that the sale or possession of all substances that mimic illegal drugs, is prohibited.But! only if it can be shows that it is intended for human use.Now, the people who make the bath salts and other things similar have made a habit of posting, “Not for human consumption” right on every package. It is obvious that it is, but because of this it seems there’s not a lot that can be done yet. Other than to let everyone know about this product, where to get it, what it is, what it does, and why not to do it! If we let everyone know what does product does, and they know all about it, they know how and why to avoid it!