If you are looking for Batman and Robin Costumes for Kids, consider letting your little one dress up with a superhero outfit to act as Batman or Robin to fight crime on Halloween night.Most people will pick their Halloween costumes based on their favorite movie characters. Thus, I wouldn’t surprise if someone tells me that Batman and Robin’s costumes are the hot trend this year.There are a lot of choices available at the local departmental store as well as an e-store. To ease your online shopping, I just pick those costumes for kids. On top of fancy dress options, I hope you enjoy the video about the Batman and Robin costumes presented below.#This post contains affiliate links. If you click a link and buy something I may receive some compensation. This does not change the price you would pay.#

Good news to share here. I joined Amazon Subscribe and Save Program recently and found that it helps to save my grocery bill. You too can do so. Click here to explore more about the program and take action to start saving your money right now. 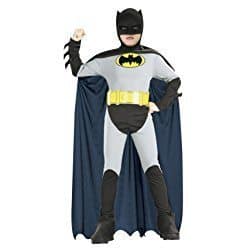 Batman Classic Halloween Costume
First of all, let’s have a look at the Batman classic costume for kids. Your little hero definitely likes to save the day during Halloween season by wearing his complete Batman outfit that includes a grey color jumpsuit, headpiece as well as belt and cape. #CommissionsEarned

There is a customer who commends that this is a great costume with a nice long cape. She did a smart choice of ordering one size up to ensure the costume fits with additional layers of clothing underneath.

There is some customer’s feedback the mask is relatively small in size. They did send back the mask to the seller for a replacement. 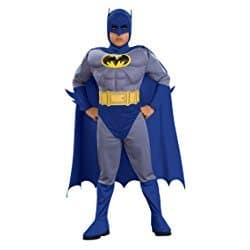 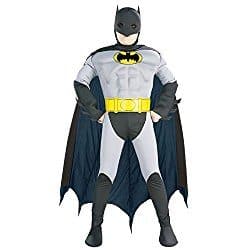 The classic Batman costume is not cool enough? Consider these two costumes featuring a muscle chest. Honestly, I am not Batman fans and so my son. I have no ideas about why there are two colors. Which one is inspired by a comic book? Anyhow, both package comes with Batman jumpsuit, headpiece, belt, and cape. This type of superhero costume would be a great gift for kids all year long. A grandmother said she gave it to her grandson who is a Batman super fan as a Christmas present and the boy was so happy with it. 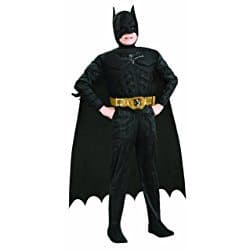 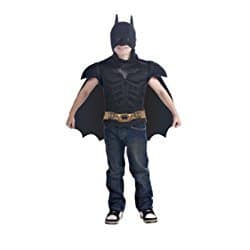 The deluxe Batman costume package contains the Dark Knight Rises Muscle chest jumpsuit with attached boot tops, headpiece, the classic cape, and the attractive belt. If your son is going to attend a party with a superhero theme, you may consider the Dark Knight shirt. He can wear his own dark blue jean to match the super-cool shirt which comes with a mask and cape. 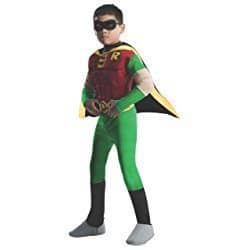 DC Comics Teen Titans Deluxe Muscle Chest Robin Costume
Grab this Robin costume for your son to enjoy the cosplay. Besides Halloween, this superhero costume is suited for a themed party or just for fun like the kids in the video above. This package includes The Robin muscle chest jumpsuit with boot tops, eye mask, cape, and belt. Some costumes said the eyeholes of the mask is slightly small. There is a mum cut accordingly to fixed them right up for her 4 years old son. #CommissionsEarned 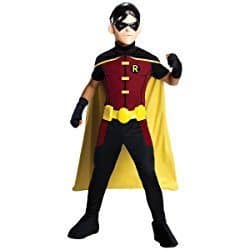 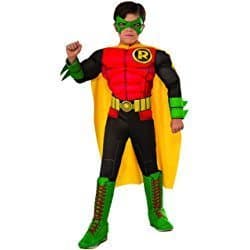 They are cool Robin costumes. The left-side one is Young Justice Robin costume that comes with a jumpsuit with an attached cape and accessories such as belt, mask, and gloves. The right-side one features nice details on legs and wrists. It will transform a young boy into the strongest boy and trick-or-treat in style at Halloween party.

Robin Costumes for Girls and Toddlers 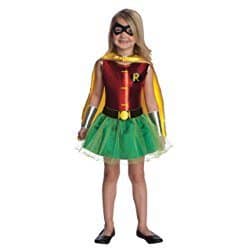 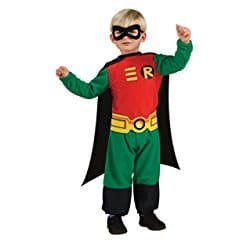 The Robin costume for girls features a sleeveless dress with a sparkly tutu skirt. It comes with a removable cape, eye mask, belt, and gauntlets. The toddler’s one is quite similar to the above costume design and color. The main difference is that it just a green and red printed jumpsuit without muscle chest. The cape and eye masks are included in the package.